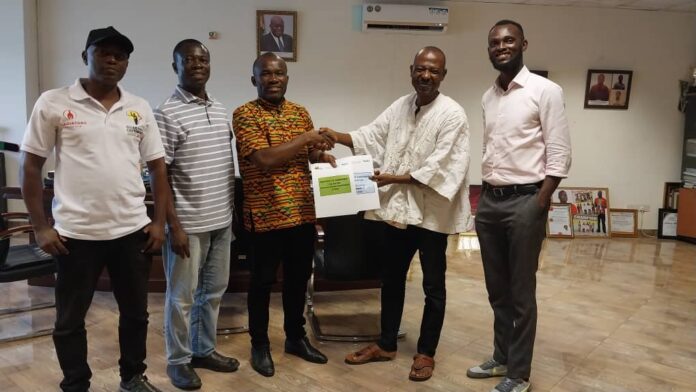 The Director General of the National Sports Authority, Prof. Peter Twumasi has commended the Ghana Cycling Federation for the DerbyWheel Cycling initiative soon to be introduced into the country.

The endorsement of the initiative by the NSA Boss is a positive respite for the Federation and Pro Keiren Tour DerbyWheel, the Korean investors, who are the major stakeholders in this exercise.

Managing Director of Pro Keiren Africa, Shaaban Mohammed explained the importance of the Kieren Cycling Sport in Ghana of which a velodrome is to be built to that effect. It is projected that the velodrome, which will serve that sporting purpose will be posited in the capital of Accra.

With the endorsement of the National Authorities in the DerbyWheel initiative, Ghana will be benefitting from the erection of a first-class velodrome which will begin the process of competition.

Other members who called on the Director General include, Mr. Godwin Vasco Nukunu, Project Manager, Dennis Kweku Moore, Cycling correspondent, and Hubert, a representative from the Technical Department of the National Sports Authority.

Today’s meeting marks a new beginning in the Keiren DerbyWheel Sport and offers a wider opportunity for cyclists in the country as potential Keiren DerbyWheel riders would be transformed into professionals on salaries.

ALSO READ  Donovan Mitchell excited to help Cavaliers reach their potential
AMA GHANA is not responsible for the reportage or opinions of contributors published on the website.