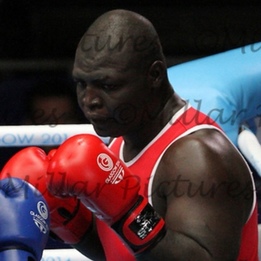 Osumanu Haruna, the National Heavyweight and West African champion has composed a song for the Senior National Soccer team the Black Stars of Ghana.

Osumanu Haruna also known as Saabo in an interview noted that he was inspired by the Founder and CEO of the Afro Arab Group Ambassador Alhaji Salamu Amadu to compose the song for the Black Stars in the Hausa language.

“This project wouldn’t have been successful without the unflappable support from Ambassador Alhaji Salamu Amadu. I want to use this medium to say a very big thank you to him for making it possible for me to come out with a song for the Black Stars who are currently in Qatar representing Mother Ghana”.

The Multi-talented Saabo who is also known for his traditional songs furthermore urged Muslims across the country to fast and pray for the Black Stars in the Mundial.

Ambassador Alhaji Salamu Amadu on his part hinted that the song composed by the Multi-talented boxer is dedicated to the captain of the Black Stars Andre Dede Ayew.

“Alhamdulillah for the song. I want to use this platform to dedicate the song Dede Ayew for his selfless exemplary leadership. Indeed he is emulating the historic pace his Dad left behind as a player and the captain of the Black Stars”.

Saabo also called on Maamobi-based player Kudus Mohammed and other players from zongos and inner cities to play all out for the Black Stars against Portugal on Thursday, 24th November 2022.

“The success story of Ghana Football will not be complete without Abedi Ayew Pele, Sulley Ali Muntari, Mohammed Polo, Abukari Damba, Ali Jarah among other notable players from the Zongos”, he added.

ALSO READ  Commonwealth Games in Birmingham: Sports Minister hosts Ghana's medal winners
AMA GHANA is not responsible for the reportage or opinions of contributors published on the website.