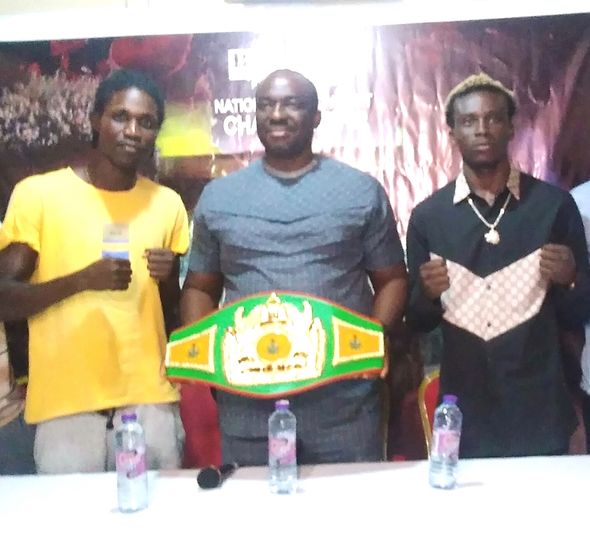 President of the Ghana Boxing Authority GBA Mr. Abraham Kotei Neequaye commended and congratulated Bazooka Promotions and Management Syndicate for their professional approach to the bill and encouraged them to ensure a classic bout, which he expects.

According to the President, this is not a cheap fight for both boxers, and advised them to prepare well to give boxing fans a splendid action.

“This is a good fight by all standards, and the GBA backs the Promoters” he noted.

He also hailed the Match Maker, Abdul Rashid Williams for coming out with exciting pairings in the main bout and undercards.

Mr. Charles Jojo Ephson, leader of the Bazooka Promotions Communications team briefed the media on their plans and vision for Samuel Takyi to be the first Olympic Medalist to become a Champion.

He said the legacy of former WBA Welterweight Champion, Ike Bazooka Quartey who is also an Olympian must be remembered and lived with the production of other Champions.

“We are taking Ghana Boxing to its glorious past with quality promotion and presentation” he expressed.

Clement Ike Quartey, son of the Bazooka and Manager of Samuel Takyi said this is another chance for Ghanaians to see what they are capable of doing, and promised a show to be remembered. He announced the undercards which involve crack and amazing boxers. He hinted that top and underground artistes will feature, like Tinny, Kokoveli, Long Life and others.

While Kuwornu (12-11(8)-1) was of few words claiming the ring will tell, Takyi (3-0) was bold to say he is the current best in the lightweight class in Ghana and wants to fight the best to be the best of the best.

“We are going 12 rounds and even if Kuwornu falls I will help him to rise up so that we continue to give fans a fight to remember” he stressed.

Coach Carl Lokko of the Bronx Boxing Gym who will be in the corner of Kuwornu said they will give boxing fans a good bout, he warned Takyi not to be complescent, while Coach Jibrila, the deputy coach of Takyi promised a knock out by round three.

The bout takes place at the Bukom Boxing Arena on December 30 with tickets going for 30gh for Regular Stand, 50gh for VIP, 100gh for VVIP and 500ghc for Ringside.