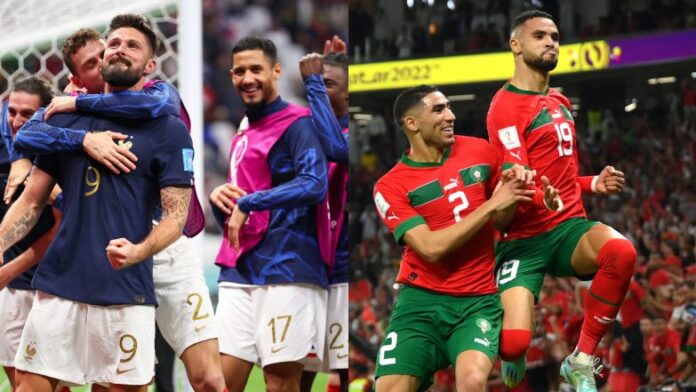 The second semifinal at the 2022 World Cup will see new ground broken for African football, as Morocco become the first team to participate in this stage of the men’s senior global tournament. Their opponents will be France at the Al Bayt Stadium on the evening of Wednesday 14 December.

Morocco earned their semifinal spot with a hard-fought 1-0 triumph over Portugal in the quarterfinal – with Youssef En Nesyri scoring the only goal of the match a few minutes before halftime.

“We came up against a really great Portugal team. We’re drawing on all we have, we still have guys injured. I told the guys before the match we had to write history for Africa. I’m very, very happy,” said Atlas Lions coach Walid Regragui.

“Africa is back on the map of football. We had the mentality. We knew we could make history for Africa. We had the right attitude for our people, for us, for Africa.”

France, meanwhile, claimed a 2-1 win over old rivals England in their quarterfinal, as goals from Aurelien Tchouameni and Olivier Giroud – plus a key missed penalty from Harry Kane – kept Les Bleus on course to retain their title.

“Our coach believes in us being a group, being a team,” said attacking midfielder Antoine Griezmann. “It’s up to us to have that mentality off and on the pitch. We’re on the right path. We’re a group that lives well together. I see it in training, too. Everyone gives 100 per cent and we have the perfect set-up to take us as far as possible.”

Kylian Mbappe – In many pundits’ eyes, Mbappe is now clearly the world’s best football player, with his unmatched speed and athleticism allied to a near-perfect technique, and a composure that has grown with experience. Already a World Cup winner as a teenager, he could cement a status as an all-time great at the age of just 23.

Hakim Ziyech – The Chelsea winger had to be replaced due to a minor injury in the quarterfinal against Portugal, but Morocco will hope he is fit for this semifinal clash. His vision, passing and goal threat when cutting inside from the flank to shoot are key to the Atlas Lions’ hopes of making the final on Sunday.

In head-to-head stats, France and Morocco have met in seven previous matches. Les Bleus boast an unbeaten record, with five wins and two draws. The teams’ most recent clash was an international friendly in Paris in November 2007 which ended in a 2-2 draw.

Didier Deschamps v Walid Regragui – Deschamps has major tournament credentials under his belt, but even he must be stunned by the incredible job Regragui has done in less than 100 days in charge of the Morocco team.

Raphael Varane v Youssef En-Nesyri – The France centre-back has been a foundational part of this team, but he faces a tough task against the relentless and determined En-Nesyri, the hero of Morocco’s quarterfinal win over Portugal.

Adrien Rabiot v Sofyan Amrabat – Rabiot has played a key role in his side’s progression into the final four, and the same can be said of Amrabat, whose indefatigable competitiveness encapsulates all that Morocco have represented at Qatar 2022.

Don’t miss the Football Season on SuperSport on DStv and GOtv. Visit www.dstv.com and www.gotvafrica.com to subscribe or upgrade, and join in on the excitement. And while you’re on the move, you can stream matches on the DStv App.