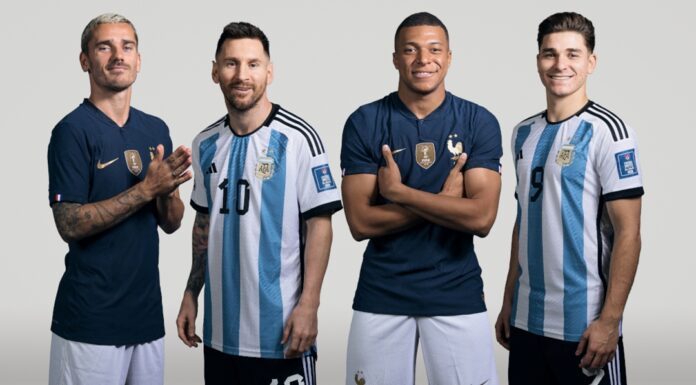 Argentina and France meet in Sunday’s World Cup final at Lusail Stadium. Both countries are bidding for their third title with the French having the chance to become the first back-to-back champions since Brazil in 1962.

Here are three of the key match-ups that are likely to have a strong bearing on the result:

Mbappe is a candidate for the World Cup’s player of the tournament, having led France to their second consecutive final.

The jet-heeled 23-year-old forward has scored five times in six games, surpassing his tally from the 2018 tournament, and has now scored nine World Cup goals in 13 appearances across the two editions.

Mbappe’s explosive pace and technique were a nightmare for Morocco’s defenders Achraf Dari and Achraf Hakimi, who tried in vain to stop him from getting down France’s left channel in their semifinal.

Now Argentina right back Molina will be tasked with marking Mbappe.

Molina arrived at the World Cup having faced criticism after struggling in his first season with Atletico Madrid, but he has been solid during the tournament and started every match.

The potential match-up could lead coach Lionel Scaloni to deploy a three-man defence like he did in their quarterfinal against the Netherlands, to provide Molina with support.

One of the most anticipated match-ups will be Argentina’s great Messi against France’s rising star-holding midfielder Tchouameni.

They have faced each other once before, as Paris St Germain and Monaco played in the French league in the 2021-22 season.

Messi got the better of Tchouameni in that encounter, with PSG winning 2-0 and the Argentinian delivering an assist for one of the two goals Mbappe scored.

However, the 22-year-old Tchouameni has been brilliant since joining Real Madrid in August, where he immediately replaced the long-serving Casemiro and is regarded as one of the most talented box-to-box midfielders.

His task in slowing down Messi on Sunday should be crucial for France’s success.

Griezmann’s combination of hard graft and guile at both ends of the pitch have caught the eye and made his role as a floating midfielder one of the most fascinating stories of the World Cup so far.

While Kylian Mbappe could win the tournament’s Golden Boot, Griezmann has been the cornerstone of France’s success in the tournament, creating several chances while also dropping deep and breaking up play.

Playing a similar role for Argentina is rising star Enzo Fernandez, who had not even made his debut six months ago but has become an intrinsic part of Scaloni’s system as a box-to-box midfielder.

With both being the heart and soul of their teams’ midfield, the one who manages to gain control could be responsible for dictating the pace of what should be a balanced clash on Sunday.

Catch the 2022 FIFA World Cup on SuperSport in 13 languages. Press “Options” on your remote for languages available in your region.