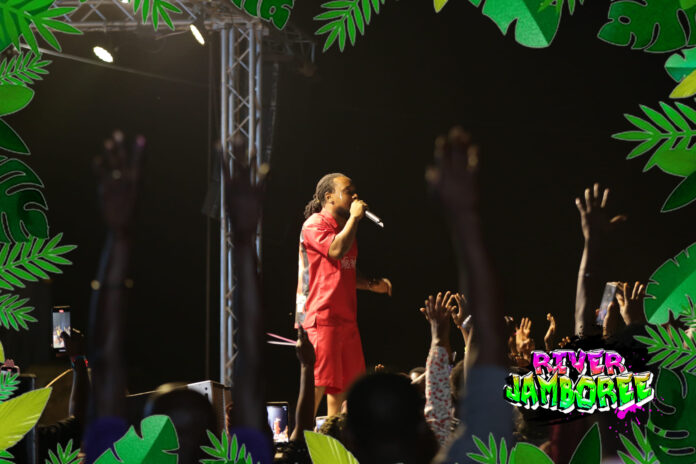 Revelers in Ghana had a different feel of the Yuletide at the maiden edition of the River Jamboree.

The event which was aimed at giving people a fun time outside the city was held at Volo in the Volta Region on the 29th and 30th of December 2022.

River Jamboree was an opportunity for people who sought to escape the hustle and bustle of the cities to catch the cool breeze of the Volta River at Volo.

Tents were rented out to attendees and also for those who wanted to have a feel of how Christmas is celebrated in the villages, there was what is known in Akan as ‘bronya dan,’ a hut made of palm fronds, palm leaves, and in some cases grasses.

Another side attraction was a display of indigenous Ghanaian culture through music, food, dance, and fashion.

Prior to the event, the Head of Production, Jonilar, said that aside from the fun aspect of the River Jamboree, they also sought to use the platform to drum home the need to protect our river bodies.

“There is a reason we chose to have the programme along the river. We aim at encouraging people to take good care of our water bodies. It is sad that we are fast losing our natural resources including water bodies. We can only use platforms like this to drum home the danger we cause ourselves when we continue degrading our environment, he said.

Some of the people who graced the 2022 River Jamboree include Samuel Okudzeto Ablakwa, the Member of Parliament for the North Tongu in the Volta Region of Ghana.

Just like many patrons, the law-maker was enthused by the ingenuity in the concept of the programme.

Ghana has become the hub of arts and tourism in December. As part of the ‘December in GH’ initiative by the Ministry of Tourism Arts and Culture to get more tourist troops into the country during Christmas, a lot of events are held across the country.

With the concentration mostly on Accra, a lot of entertainment stakeholders have called on event organisers to target other parts of the country just as River Jamboree did at Volo.

According to rapper Sarkodie, music video director Nicole Sey and the Executive Director of Afro Nation Ghana, Ruddy Kwakye, spreading out events across the country, will help increase the industry’s fortunes of maximizing gains.

The River Jamboree promises to be an annual affair and will be dedicated to serving people outside the city.