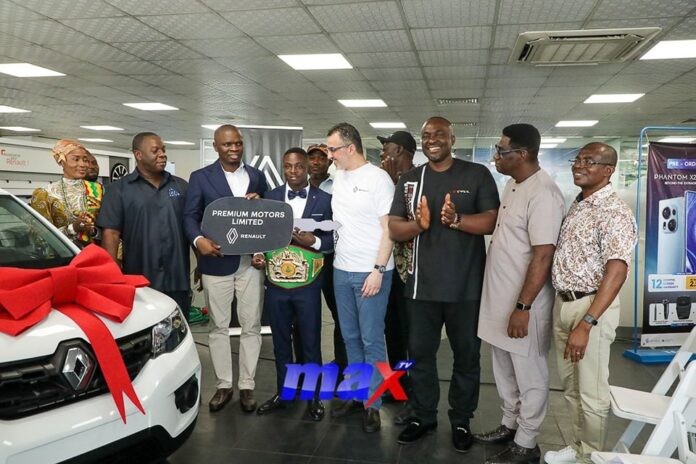 The best boxer, 19-year-old Charles Tetteh and Charles Quartey Boxing Foundation, the best gym at the first season of the De-luxy Professional boxing league have received their brand new Renault vehicles from Premium Motors at an impressive ceremony in Accra.

Mr. Jihad Hijazi, CEO of Renault Ghana (Premium Motors) said he was proud to be part of the successful season, but was skeptical when he was approached, however, the League has been professionally organized and promised to take it to the next level for more people to benefit.

Chairperson for the ceremony, Naana Adiki Manyeyo Adi 1, of the Royal Adibiawe at Ada congratulated organisers and winners as well as Premium Motors Ltd for their corporate social responsibility activities.

She said the youth have the energy for the nation and it is good to support and encourage future leaders.

Director of operations at the Jubilee House, Hon. Lord Oblitey Commey, who was a special guest charged the Minister of Youth and Sports to invest in boxing and they will see more youth from Bukom and other places changing their lives and becoming world champions.

He expressed that former Presidents of Ghana from the late Jerry John Rawlings to Nana Akufo-Addo all loved Boxing, but the Ministry of Youth and Sports only pays lip service to boxing and invests more in football which has not given positive results as compared to boxing which has yielded 10 credible world champions.

“Let’s invest the taxpayer’s money in boxing, the talents are there in thousands we will get the results,” he expressed.

Hon. Mustapha Ussif, the Minister of Youth and Sports said the De-luxy Professional Boxing League has been successful and he is excited about the exposure for boxers and sponsorship from Premium Motors and others.

He said government alone cannot do everything in sports and called for more corporate support.

He urged other companies to emulate the example of Premium Motors so that the youth and Ghana Sports will be better and charged Sports Federations to package their products to be attractive like the Ghana Boxing Authority (GBA).

Mr. Abraham Neequaye, President of the Ghana Boxing Authority thanked Imax Media Promotions for their contribution and commitment to the development and promotion of Ghana Boxing which saw them organizing 20 big fight nights during the period and rewarding participants with fantastic prizes.

He hinted that Imax Media Promotions has been hailed by Boxrec internationally for their splendid work and urged them to continue, he also thanked all other stakeholders who played a part in the exciting Boxing League. He announced that the League will be extended to other regions like the Volta, Ashanti, Northern and Eastern to unearth more talents.

Mr. Fadi Fattal, Group Director of Imax Media Promotions said over one million dollars was invested in the program to ensure that people watch in the comfort of their homes, and the fans who watched free at the Bukom Boxing Arena also did well in cheering and dancing to add to the excitement.

He also thanked the Minister of Youth and Sports and the GBA and assured them of their commitment to the development of Ghana Sports in general.

The Ghana Boxing Supporters Union (GHABSU), Ghana Boxing Writers, boxers, and trainers were there to add to the excitement and jubilation.