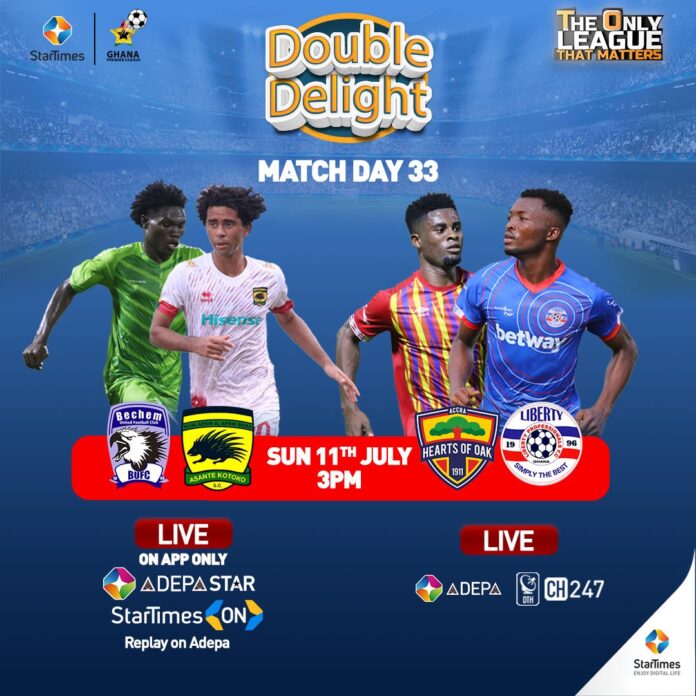 Africa’s leading pay-tv operator StarTimes is set to offer viewers of the Ghana Premier League an unprecedented TV coverage in the penultimate round of 33 matchday.

Ghanaians will for the first time in the history of Ghana Football witness two live matches aired simultaneously from the Ghana Premier League as the season draws to an exciting end.

Asante Kotoko and Hearts of Oak who are in a two-horse race for the title will have their games aired at 3:00pm live on Sunday, July 11, 2021.

According to the GFA schedule for Match Day 33, all games but one will be honoured simultaneously at 3:00pm on Sunday and StarTimes, the official broadcaster will offer fans the opportunity to watch both games live on DTH and OTT.

Hearts of Oak who are a win away from winning the league title hosts relegation-threatened Liberty professionals at the Accra Sports stadium while second-placed Asante Kotoko travels to take on Bechem United, a team in search of survival.

StarTimes will kick off the matchday 33 schedule with a live coverage of the relegation battle game on Saturday, July 10 between King Faisal and Mysterious Dwarfs at 3:00pm on StarTimes ADEPA channel and Max TV.

Then on Sunday, July 11, Hearts of Oak vs Liberty Professionals will be aired on StarTimes ADEPA channel on the decoder (DTH) while Bechem United vs Asante Kotoko beams live on a virtual channel available only on the StarTimes ON APP, ADEPA STAR channel (OTT).

Bechem United vs Asante Kotoko will be repeated on StarTimes ADEPA on the decoder right after the Hearts vs Liberty coverage.

“ADEPA STAR channel was created because we know the importance of having to watch more live matches at the same time. Hearts and Kotoko are the two most glamourous clubs in the country and we need to satisfy both set of fans as their matches happen at the same time.”

“We had to pull all strings at this point to ensure our cherished viewers enjoy both games live and not to watch one after the other.”

“StarTimes has invested millions of dollars into Ghana Football since our partnership with the GFA begun and we intend to do more to uplift the status of the local game,” intimates the Head of Marketing for StarTimes Ghana, Mrs Akofa Banson.