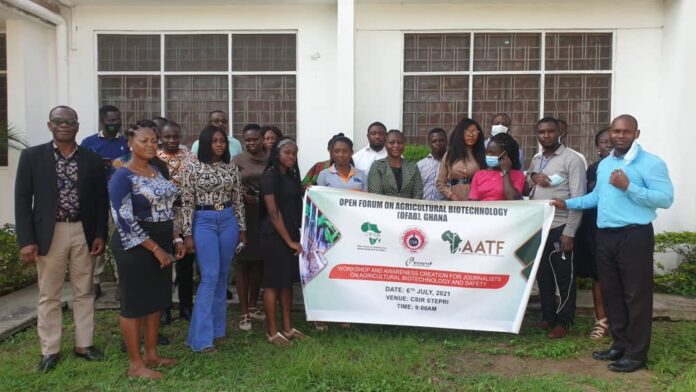 A Senior Scientist at the Council for Scientific and Industrial Research (CSIR) who is also the National Coordinator for the Open Forum on Agricultural Biotechnology (OFAB), Dr Richard Ampadu Ameyaw, has said, the CSIR had not released any Genetically Modified Organisms (GMOs) products onto the Ghanaian market ever since it began developing and researching on the BT cowpeas and a variety of rice, both GMOs.

According to him,  the rumours in Ghana that there is GMO rice local called (rubber rice) in the market are all false.

“As of now, there is no GMO crops or products in Ghana. The rumours of rubber rice are all false. The rice we think is GMO in the market might have probably had a lot of starch in them but are not GMOs”.

He said this on Tuesday, July 6, 2021, at a media workshop organized by the CSIR in collaboration with OFAB aimed at educating the media on biosafety law and the state of the law in the country.

The workshop brought together media practitioners from the length and breadth of the country, both physically and via zoom.

He noted that a lot of people did not understand GMOs’ issues and that some people had taken an ideological position that interfering with nature was an abomination, stating that however, other countries were increasing their agricultural outputs using that science and technology (GMOs) and that Ghana was trading with them.

In 2016, according to an ISAA report, 18 million farmers in 26 countries chose to grow GM crops. Developing nations accounted for 54 per cent of the hectares planted in biotech crops globally. GM crops helped to reduce poverty and hunger benefiting 18 million smallholders farmers and their families totally of 65 million people.

GM crops also provide real environmental benefits. Between 1960-2015 the productivity gained through biotechnology save 174 million hectares of land from ploughing and cultivation. GM crops decreased the environmental impact from herbicide and insecticide use by 19 per cent. and GM crops reduce c0² emissions equivalent to taking 12 million cars off the road for a year.

According to Dr Richard, there is no evidence anywhere in the world of GMO crops causing disease or death among humans or livestock. GMOs are the safety foods that have ever been produced because they undergo extensive testing before they are made available to the public.

Consequently Improper handling of any food can cause illness, so food safety guidelines should be followed.

Mr Eric Amaning Okoree, Chief Executive Officer, NBA  focus for the year 2021 was on activities such as permits for GMOs research activities and the translation of the Biosafety Act into local languages by the Bureau of Ghana Languages

GMO stands for Genetically Modified Organism. It most commonly refers to organisms—often plants that have been modified at achieving desired traits, like drought -tolerance and pest resistance, using recombinant DNA techniques or genetic engineering(GE).

Things To Know About GMOs in Africa

Biotechnology, genetic modification, genetic engineering and are terms for essentially the same process: breeding crops and livestock to have certain desirable traits.

GMOs are safe. Every major scientific body in the world agrees that GMO foods are just as safe as now-GMO foods. Number of cases of people or animals getting sick from GMOs =0

ALSO READ  TEWU strikes from today over conditions of service

Biotech in Africa is homegrown. Public scientists are working independently to help their own countries by developing genetically modified crops that address issues specific to local agriculture and meet the needs of their nation’s farmers.

GMOs are natural. Bacteria have been engaged in genetic engineering for a millennium. Humans got involved about 25 years ago and our techniques continue to improve and evolve.

Each country will manage its GMO seed production and distribution, using local seed companies. Some crops are patented, so farmers will pay for those seeds, just as they now pay for hybrid varieties. Other crops developed by the public sector will be royalty-free and available to farmers for a free or low cost. Some GMO seeds can be effectively saved. Others should be obtained new each year, like hybrids to ensure the vigour of their traits.

Europe has not banned GMOs. Four countries in the European Union currently grow insect-resistant GM maize. All the other European countries import GMO livestock feed, as well as processed foods for people that contain GMO ingredients.

Patented GMO seeds are indeed often protected by intellectual property rules, meaning farmers must pledge not to save them and replant them. Monsanto says it has sued about 150 farmers who it claims broke these rules over the past 20 years. However, hybrid seeds, which have been around for decades, also need to be purchased each season because they don’t breed true, so this is not a new issue for many farmers.

In both cases, farmers choose to purchase these seeds because they get a better yield and make more money. In addition, in many public sector projects, such as the Hawaiian papaya, insect-resistant eggplant in Bangladesh, and Water Efficient Maize for Africa, farmers are free to save and share GMO seeds and no royalties are charged.

ALSO READ  Bulldog writes on "Orders From Above — The Presidential Swoop"

Ghana’s GM Cowpea is engineered to be resistant to Maruca pests.

Currently, the consensus and evidence are clear, as echoed by the National Academies of Sciences Engineering and Medicine (NASEM 2016), that “Based on the available data, the committee found that planting of Bt crops has tended to result in higher insect biodiversity on farms than planting similar varieties without the Bt trait insecticide”.