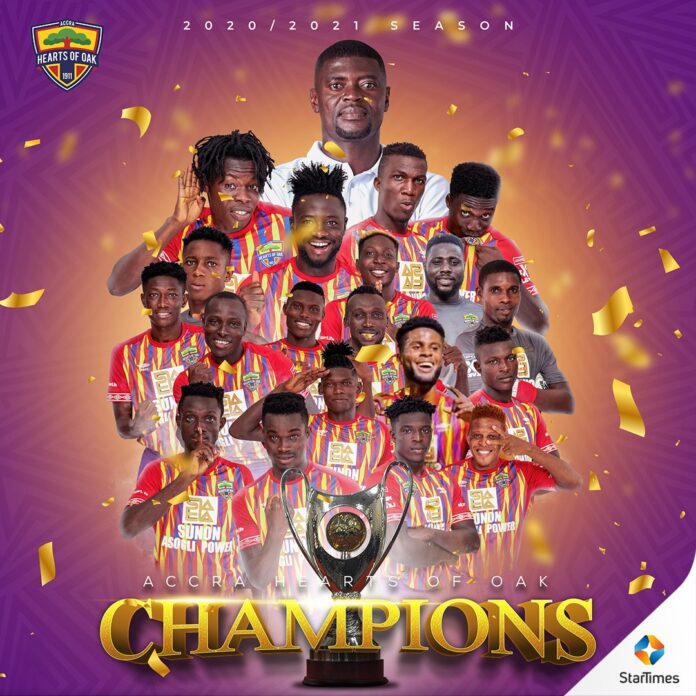 Hearts of Oak were crowned league champions for the first time after a decade after they were held at home by Liberty Professionals on Sunday.

The game which was played at the Accra Sports stadium was met with a raucous reception as fans of the Phobians filled the stadium to quarter capacity.

Hearts of Oak needed to at least match Kotoko’s results to be crowned league champions.

As a result, Liberty dominated proceedings in the early part of the game. However, Hearts created the better opportunities with Kwadwo Obeng Jnr coming close a couple of times.

On the stroke of half-time, Salifu Ibrahim whipped an in-swinging which glanced off the head of Daniel Barnieh at the near post to give Hearts the lead.

The Phobians strolled through the second half knowing Kotoko were losing at Bechem.

Liberty deservedly grabbed a late equaliser through Paul Kwame but that didn’t disrupt the party at full time as Hearts were crowned champions.

ALSO READ  Spanish Super Cup: Athletic Club beats Real Madrid to book finals with Barca
AMA GHANA is not responsible for the reportage or opinions of contributors published on the website.