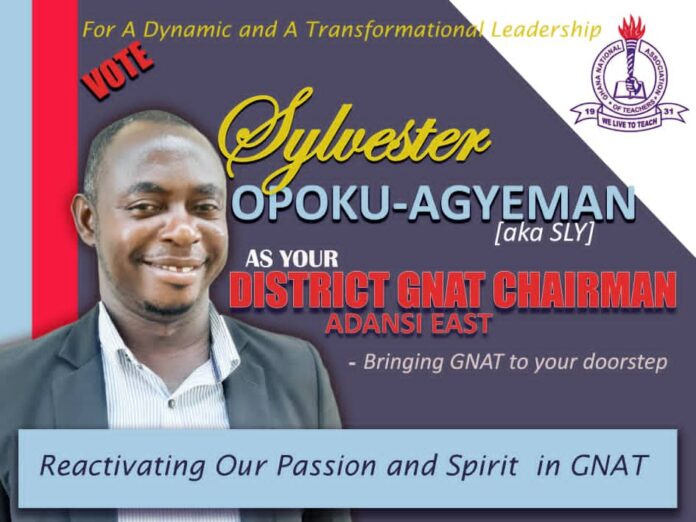 An aspiring candidate in the upcoming GNAT elections in the Adansi East District of the Ashanti Region, Sylvester Opoku-Agyeman has denied a number of allegations levelled against him.

Mr. Sylvester Opoku-Agyeman, who is contesting for the position of GNAT Chairman said there was an allegation against him as going to court to place an injunction on the upcoming elections in the district.

“My detractors for the position I am vying for have sought to put up litany of lies against my personality and candidature trying to project my persona negatively with malice. They have accused me of going to court for an injunction to restrain the district for conducting her conference which in an actual fact was actually postponed as a result of an injunction from the New Edubiase District Court by the incumbent Chairman. I want to state emphatically that I have not gone to any court within our jurisdiction and the entire country as a whole to pray the court to restrain the district executives from conducting the 2021 District Conference.”

Mr. Opoku-Agyeman further described as false allegation of him stopping the salary of the incumbent Chairman and also masterminding his disqualification.

“Every teacher knows that it is only their superiors that is Headteachers, Headmasters and Headmistresses and in the case of the District, Metro, Regional Directorates, it is directors who validate the salaries of all members of staff. I am not in any of the positions above neither have I been given the mandate by any superior to validate anybody.”

He also described as untrue another allegation of him masterminding disqualification of the incumbent chairman from the contest by the district GNAT Electoral Commission (GNATEC).

“I am not a member of the committee tasked by GNAT that is GNAT Electoral Commission (GNATEC) tasked to vet, screen, interview and select contestants for the various positions after the nomination period, therefore it is only irrational and mischievous for someone to peddle lies that I have a hand in their decision to disqualify the incumbent chairman as being circulated in the district.”

Mr. Opoku-Agyeman noted that his campaign message revolves around six main things that would help GNAT members in the district.

“I would Bring GNAT to the doorstep of teachers through termly visitation to Schools address the concerns of Teachers. Intensification of membership education through modern technological information dissemination and the use of social media platforms to get all GNAT members on board.  Liaising with the youth desk for educational trips, games and other welfare packages. The district will support selected local activities to ease the financial burden on the Locals.”

He also added that there would be an Annual Professional Development Workshop for teachers to meet the NTC requirements for renewal of Teacher License. Extra income generation activities to better the condition of living of teachers including mushroom cultivation, Grass cutter and rabbits rearing and Entrepreneurial Skill Training would be looked at.

COP26 and Africa’s Energy Poverty: A roadmap to ending energy poverty by 2030