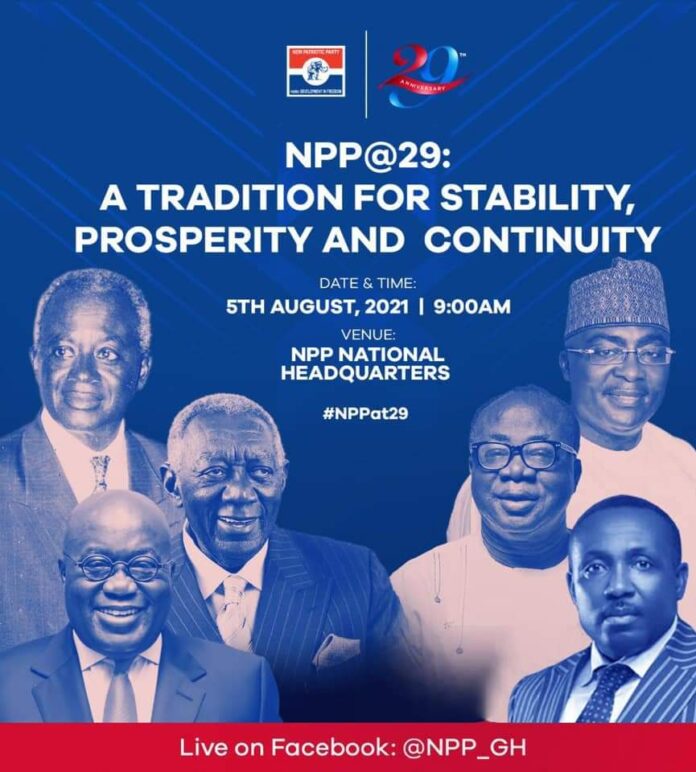 A group sympathetic to the governing New Patriotic Party (NPP) has called on the National Executive Committee(NEC) to ensure the legacies of the late Vice President Aliu Mahama are preserved as the party celebrates its twenty-ninth anniversary.

According to the group, it has come to the realization that the legacies of one of the successful Vice Presidents of the Fourth Republic, for that matter one of the successful politicians the party has had in history over the past two decades and more is being obliterated by the current leadership of the party.

The Director of Operations for Dombo Advocacy Forum(DAF); advocacy and a pressure group, Mr. Suleman Alhassan Atakpo made this observation in an interview over some posters the party hierarchy released for the celebration of the twenty-ninth anniversary which has gone viral on social media platforms.

He said the poster titled NPP at 29: ‘A Tradition for Stability, Prosperity, and Continuity ‘ announcing the organization of a press conference at the party’s headquarters in Accra to mark the day, obliterated the image of the late Vice President, Aliu Mahama from the activities to mark the celebrations.

The flyer announcing the press conference to mark the celebration had the image of the President Nana Addo Dankwa Akufo-Addo, his Vice President Dr. Mahamadu Bawumia, former President John Agyekum Kufour, the late Adu Boahen,  former flag bearer of the party, the National Chairman of the party, Freddie Blay and the General Secretary, John Boadu.

The poster left out the image of the late Vice President, Aliu Mahama, and the former running mate to Adu Boahen, I..R Alhassan, who all happen be northerners, he argued.

This is a worrying development at the time the party is at the crossroads of electing a flagbearer for the 2024 general elections, he said The Director of operations for the group set out to promote the deeds and legacies of the late S.D Dombo said one of the very people who paved the way for the current Vice President’s success is the late  Alhaji Aliu Mahama but the party seems to have forgotten about him in the organization of the anniversary programme.

The group is further calling on the NEC of the party to as a matter of urgency correct this if it is annually.

‘This will not be taken likely as a group if the party fails to do the right thing, the group warns.