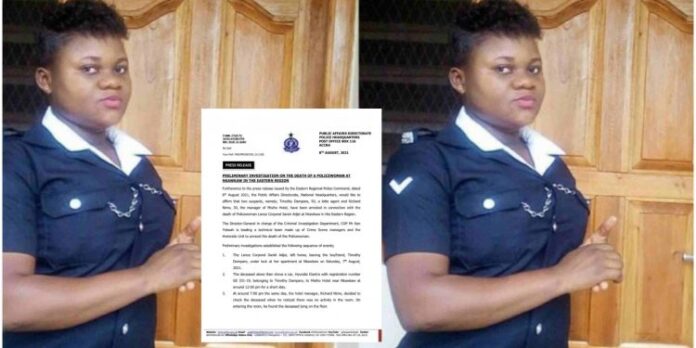 The Police have arrested two suspects, while it is pursuing a third person in connection with the death of a policewoman found in a hotel at Nkawkaw in the Eastern Region on Saturday, August 7, 2021.

The Police made this known in a statement issued on Sunday, August 8, 2021.

The statement added that the Director-General of the Criminal Investigation Department (CID), COP Ken Yeboah, has taken over investigations into the matter.

COP Ken Yeboah is thus leading a technical team made up of crime scene managers and the Homicide Unit to the scene per the statement.

“Furtherance to the release by the Eastern Regional police command, dated 8th August 2021, the public Affairs Directorate National Headquarters, would like to affirm that two suspects, namely, Timothy Dampare, 50, a lotto agent, and Richard Nimo, 30, the manager of Misiho Hotel, have been arrested in connection with the death of a policewoman Lance Corporal Sarah Adjei at Nkawkaw in the Eastern Region.“

ALSO READ  Police receive remains of cop stabbed to death in the line of duty
AMA GHANA is not responsible for the reportage or opinions of contributors published on the website.