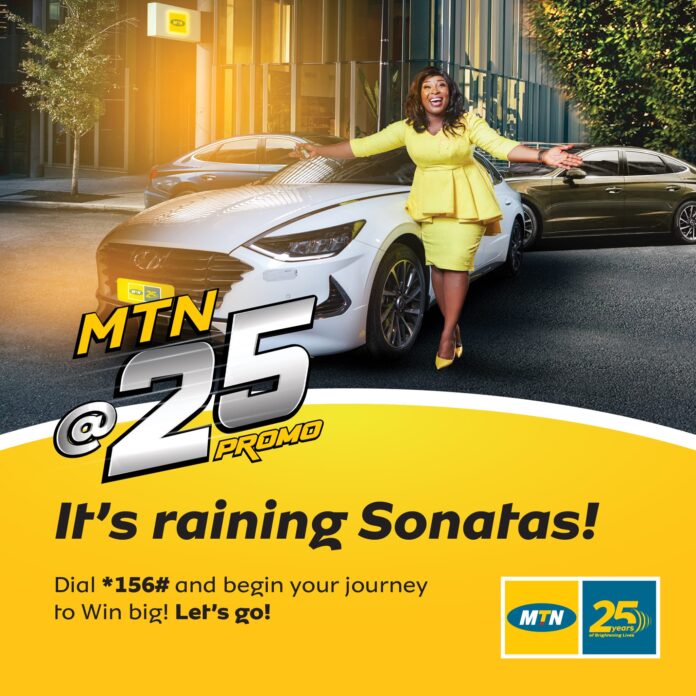 MTN Ghana is set to give out 25 Hyundai Sonata saloon cars over the next three months in a GHC10 million MTN @25 Mega Promo.

The customer reward promo, which is just one of several reward packages MTN is giving to customers as part of the 25th Anniversary, also promises cash other juicy prizes over the three-month period.

Already, MTN has given all customers free on-net calls dubbed “Good Morning Ghana” for the whole month of June, plus some other juicy packages to selected categories of customers who have been with the telco since inception.

Senior Specialist for Segment Marketing at MTN, Maxwell Arthur told journalists in a virtual presser that the promo has been designed such that “at least one person on all 16 regions of the country will win at least one car.”

He explained that of the 25 cars, nine of them would be made available to be won by people at random, irrespective of the regions they live in, but the remaining 16 will be deliberately allocated one each to the 16 regions.

Maxwell Arthur said for the three-month promo period, five cars would be won in August, 10 cars in September, and another 10 cars in October, adding that three cars each would be available for random wins for each of the three months, and the remaining cars will be allocated to regions in alphabetic order, beginning from Ahafo Region to Volta Region.

According to him each of the 21 million MTN customers could only stand a chance of winning if they enter the promo by dialing *156# and selecting option 5 (MTN @25 Mega Promo). Participation if free.

He said per the rule of the promo, every 1Gp spend via voice, SMS, data, VAS (value-added service), digital and mobile money, earns the customer one point, but there is additional value for people who access MTN services via the digital channels like MyMTN, MTNPulse and Ayoba.

“When you access MTN services via the digital channels you get 10 points for every pesewa spent, instead of just one point,” he said.

This is to encourage customers to use the digital channels as MTN works towards becoming a fully digital operator by year 2023.

He also explained that with mobile money, customer only gains points when they transact a minimum of GHC100 upwards.

MTN has also designed the mechanics for the promo in such a way that both high-end and regular customers would stand equal chance of winning the prizes.

Maxwell Arthur explained that, working with the reputable audit firm, KPMG, MTN has come up with a tailor-made threshold of minimum points each customer should cross in order to stand a chance, based on their spending pattern over the last three months.

So the required threshold for high spenders is higher than that for low spenders over the last three months, which means low spenders are not required to spend as high as high-end customers before they can qualify.

He further explained that the metric for qualification would be based on the percentage by which one exceeds their specific threshold; so if, for instance, customer ‘A’ with a threshold of 10 points is able to accumulate 20 points at the end of the month, it means he crossed his threshold by 10 points, which is 100 per cent.

If customer ‘B’ has a threshold of 20 points, and he accumulates 35 points at the end of the promo, it means he crossed his threshold by 15points, which is 75 percent.

So, even though 15 points is higher than 10 points, customer A will win the day because he crossed his threshold by 100 per cent, which is higher than customer B’s 75 per cent.

Maxwell Arthur took the opportunity to caution MTN customers that participation is free and MTN would not charge the customer any money to redeem a prize, so any call from anyone demanding money or air time for prizes should be reported to MTN via 1515.

He said winners would only be contacted via phone call on 0244300000 so calls from any other number regarding the promo should be treated as fake.