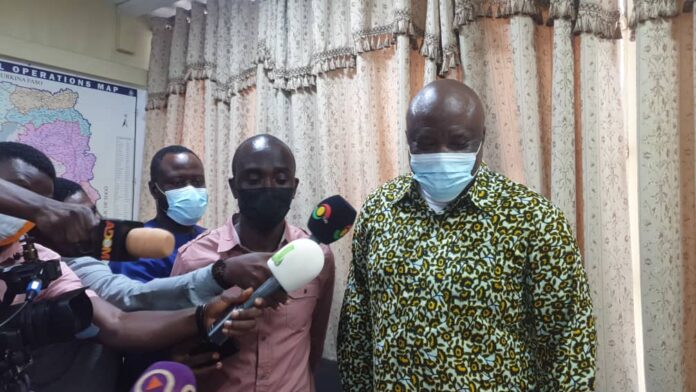 Mr. Ernest Owusu Bempah, the convener of Fixing The Country movement on Tuesday, August 10, 2021, petitioned the Inspector-General of Police (IGP) Dr. George Akuffo- Dampare to go after the leaders of #FixTheCountry campaigners over comments during their demonstration on August 4th.

Mr. Owusu Bempah, who describe the comments as ‘treasonous and uncalled for’, said the leaders of the #FixTheCountry must be arrested, properly investigated, and sanctioned.

“We the Fixing The Country Movement are here to present a petition to the Inspector General of Police in the connection with a comment suggesting to overthrow the 1992 Constitution or get rid of the fourth Republic in the recent demonstration of #fixthecountry.

“We found those comments treasonous and must be investigated. If you are saying fix the country and you are the same people violating the Laws if this country is totally unacceptable. We have presented our petition, we believe and know that the IGP will let the Laws take its course and bring those perpetrators to justice,” he stated.

It will be recalled that, during the #FixTheCountry demonstration in Accra, placards with varying inscriptions including #FixourEducation System now, A new Constitution, among several others were wielded by the protectors.

Speaking in an interview after presenting the petition, Mr. Hopeson Adorye, Director of Corporation, Fixing the country movement said the 1992 Constitution stipulates that anyone or a group of persons who get rid of the Constitution or overthrow the Constitution, or an attempt to overthrow must be executed when finding guilty at the court of law.

“But we are not here to kill anyone if Mahama has accomplished things and Nana Addo has bought pickaxes for us to destroy them, then we can understand what you mean by fix the country. The president is fixing the country. Kwame Nkrumah started to fix the country followed by his successors now to President Nana Akufo Addo. As we speak now the president is Bono East Region commissioning factories. 104 factories working in Ghana currently. What else do you want us to fix? All these put together we are moving forward,” he stated.

Adding that the leaders of the #FixTheCountry are deceiving the youths for their selfish gain, he calls on the youths to be vigilant.

“We know they are not fighting for any youth of this country. They are doing that because they want money and nobody is going to give them any money. The youths must be vigilant in order not to follow them”, he said.

He noted that the President, H.E. Nana Akufo Addo is already fixing the country.

Chief Staff officer, C/SUPT Alex Kwame Safo-Adu who received the petition on behalf of the IGP Dr. George Akuffo-Dampare promised to brief and deliver the petition to the IGP for his direction.