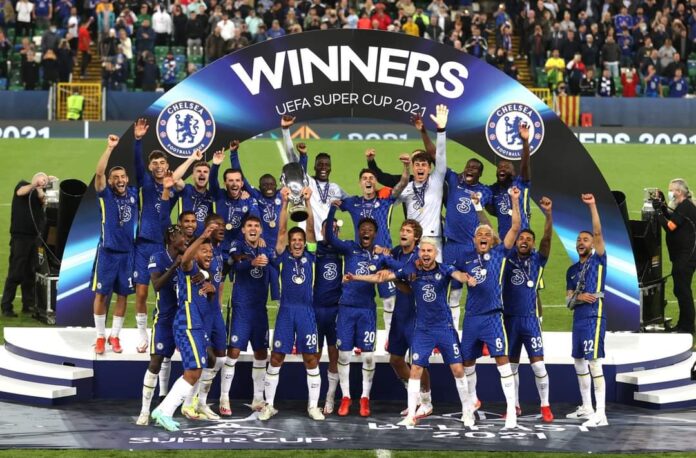 Kepa Arrizabalaga was the Chelsea hero after saving twice in a penalty shootout as Chelsea beat Villarreal to win the UEFA Super Cup.

The Spanish goalkeeper had started on the bench but was introduced at the end of extra time to replace Edouard Mendy for the European Champions as they overcame the Europa League winners.

Chelsea started the game well, dominating possession and pinning Villarreal back inside their own half, unable to find an out-ball. But as so often last season, Chelsea struggled to create, until the 27th minute when a fine pass from Marcos Alonso allowed Kai Havertz to cut back, and though Ziyech’s connection wasn’t the truest, it was enough to send the ball into the far corner.

Villarreal might’v equalised just before halftime when Gerard Moreno crossed for Albert Moreno, but his left-foot volley clattered the bar, then bounced down and out.

After half-time, Villarreal improved significantly and the game did with them, but it wasn’t until the 74th minute that they equalised, Moreno playing a terrific one-two with Boulaye Dia before sweeping an equally good finish into the top corner.

Both sides created half-chances in the time that remained, but extra time always looks likely when Unai Emery is managing one of teams playing, and that was indeed what came to pass.

Though Villarreal looked the fitter side, it was Chelsea who were better in the first period of extra-time. But 120 minutes was a lot to ask from either side, so penalties looked inevitable – even though Mason Mount, on as sub, forced a decent save out of Sergio Asenjo.

Despite Havertz failing to score his spot-kick, Kepa denied Aissa Mandi and Raul Albiol in the shootout to gift the Blues the trophy.