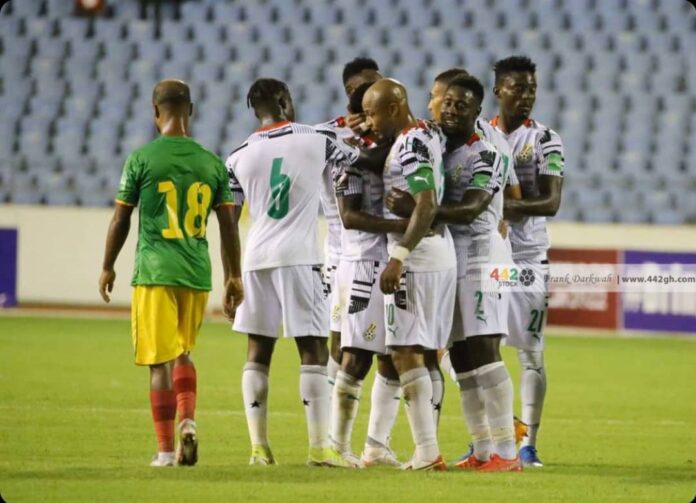 A fortuitous long-range strike by Mubarak Wakaso was enough to ensure Ghana begin the 2022 World Cup qualifiers with a victory over Ethiopia at the Cape Coast stadium on Friday.

The win against Ethiopia moves the Black Stars to the top of Group G ahead of South Africa and Zimbabwe, who both played out to a goalless draw.

Despite a slow start, the Black Stars created the first opening after 19 minutes when Jordan Ayew failed to connect with a Baba Rahman cross.

Halfway through the first half, Crystal Palace midfielder Jeffrey Schlupp went down holding his hamstring and had to be replaced by Germany-born Daniel-Kofi Kyereh, who came on for his international debut.

Ghana broke the deadlock with 10 minutes to halftime courtesy a Wakaso strike. The midfielder’s shot from long range was fumbled by goalkeeper Teklemariam Shanko, who could only helplessly watch the ball roll through his legs into the net.

After the first half, Shanko did not return to the pitch, probably for his earlier howler, as his place was taken by Fasil Gebremikael.

Ghana came close to doubling their lead in the second half through Yaw Yeboah, who drove towards goal and hit a powerful long-range effort which was parried away. Andre Ayew pounced on the rebound, but goalkeeper Gebremikael was alert to produce another save with his foot.

In what was Ethiopia’s best effort throughout the game, substitute Cherenet Gugesa drilled a low shot from just inside the box, forcing goalkeeper Richard Ofori into a diving save before Iddrisu cleared the rebound.

It was to be the last major chance of the game, as the hosts walked away with three valuable points.

Ghana will travel to face South Africa on Monday in Johannesburg in matchday two of the World Cup qualifiers.