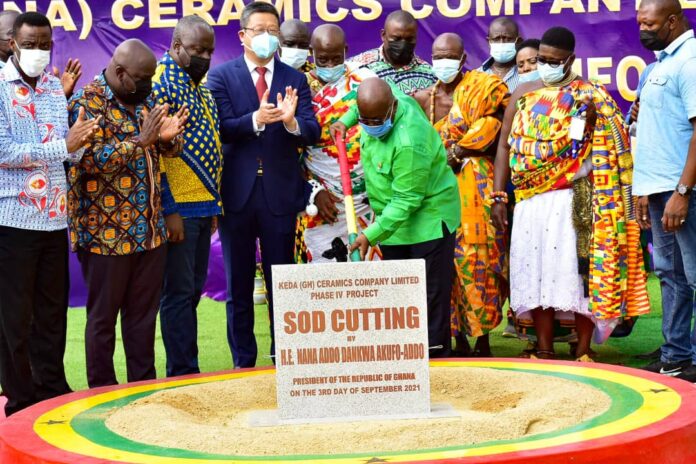 President Akufo-Addo on Friday, September 3, 2021 cut sod for the construction of phase IV of the Keda ceramics factory in Shama in the Western Region.

This was after commissioning the phase three of the project on same day which has provided more direct jobs to Ghanaians to increase revenue generation for the government.

According to President Akufo-Addo, Keda Ceramics company limited, through the phase three of the project, have generated 5,000 jobs for the catchment area and beyond and continuing to expand its activities.

Speaking at a brief ceremony, the President expressed his excitement about the project and hailed Keda Ceramics Company Limited for taking advantage of the one district one factory initiative by the government to establish one of the biggest manufacturing facilities in Ghana that spread its tentacles to the West African market.

He said that, government, as part of the one district one factory initiative, has supported Keda Ceramics Limited the project with the phase three starting in September 2019 and ending in July, 2021 and now begining the phase four.

President Akufo-Addo stated that Keda Ceramics Limited have invested $150m in all the three phases which has increased its production capacity to 150,000 meter square daily, exploiting seventy percent of its production to the ECOWAS market – feat he believes can best sell the industrial development of the country to the rest of the world.

He commended the management of Keda Ceramics Company Limited for their enterprise, vision and hard work and moreover for spreading their tentacles to West African market to generate more foreign exchange for Ghana.

The Group Chairman of Sunda International, the mother company with Keda Ceramics Company Limited as a subsidiary, Mr. Shen Yan Chang said the commissioning and the sod-cutting of the Phase Four marks another important milestone in the local ceramics tile manufacturing industry of Ghana, and it is also of great significance to the promotion of the industrialization drive of the Ghanaian economy.

“Our massive investments as a profit-making company in Ghana also speaks to the friendly business policy of the Government of Ghana”, he opined.

He was grateful to the President, the Western Regional Coordinating Council, and the traditional heads at the Shama district for a successful acquisition of the land which has enabled the construction of the project.