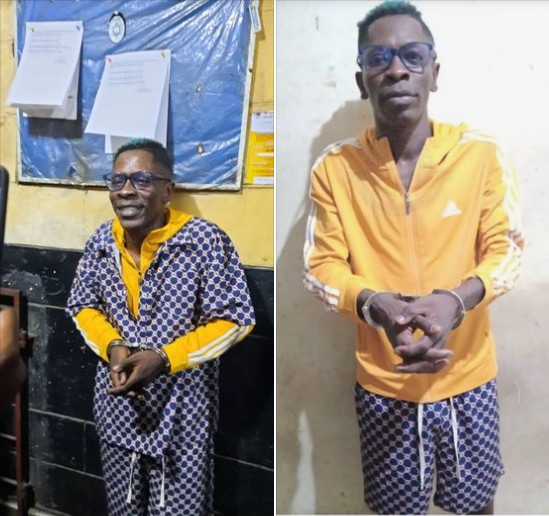 The multiple award-winning musician was arrested Tuesday evening, a few moments after two of his boys were picked up.

According to the police, he turned himself in.

Shatta Wale has been wanted by the police since Monday, October 18 after news of a supposed attack on him went viral.

The police noted in a statement that Shatta Wale was not on admission at any hospital in Accra, neither did any of his close friends and family members know of the attack and his whereabouts.

They, therefore, called on the public to help locate the musician, though later describing the news of the attack as a hoax.

The prophet, whose prophecy had instigated the supposed attack as per Shatta Wale’s post on Facebook early Tuesday, was arrested by the police late in the day for questioning.

Shatta Wale later wrote on Facebook that he will turn himself in following the arrest of Bishop Stephen Akwesi Appiah.

Police announced the arrest of the musician on its Twitter page though initially giving sketchy information.

Deep in the night, the very details of the arrest were made known by the police on Facebook.

ALSO READ  Shatta Wale, Medikal granted bail of 100k each
AMA GHANA is not responsible for the reportage or opinions of contributors published on the website.