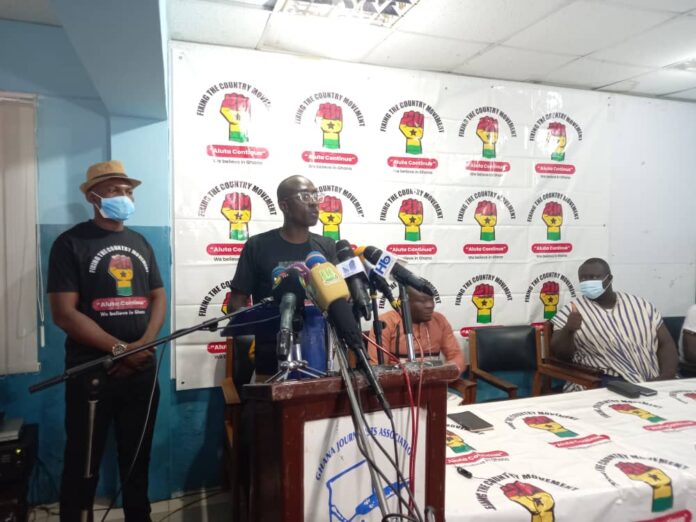 The Fixing the country movement today in a press conference dragged the Ex-president John Dramani Mahama for his latest utterances,  claiming that,  the greatest calamities will befall Ghanaians if Mahama becomes president again.

The former president of the National Democratic Party, John Dramani Mahama latest utterances,  claiming, the Electoral Commission manipulated the elections in favour of the New Patriotic Party(NPP) has waded attacks and backlash.

The Fixing the country movement speaking at the press conference said, Mahama during his “Thank You” tour in Ho, said the deployment of military personnel to collation centres forced some electoral officers to declare results in favour of the current governing party.

According to the Group,  during the election petition hearing,  the Supreme Court asked the Former president and his witnesses to produce their own collated results and they were found wanting.

“Mr Mahama couldn’t produce a distinct figure from the pink sheets in order to challenge what was declared by the Electoral Commission and yet he has to continue spouting Electoral fraud.” the movement stated.

“To the extent that the Supreme Court described Mahama’s witnesses as “Fanciful Witnesses “. While some would speak angrily of this movement as being overly critical of John Mahama, Ghanaians do not deserve this man as our former president “. They said.

The movement disclosed that, On November 18, 2016, as reported by the Daily Graphic,  John Mahama emphatically pointed out that the Electoral Commission cannot rig elections.

Former president,  John Dramani Mahama reacting to purported claims by his opponents at the time the EC was preparing to possibly rig the election in his favour,  said “Some of them have gone to the extent of saying the Electoral Commission is preparing to rig the election for John Mahama.  What absurd nonsense?”. He said.

The movement further stated that John Dramani Mahama noted that, Ghana’s Electoral system is one of the best in the world because it has inherent instruments for guaranteeing its integrity.

Speaking on behalf of the movement,  the founder,  Ernest Kofi Owusu Bempah revealed that, Mr Mahama is showing gross incompetence even in opposition.  His utterances and baseless rants highlight the weakness in our democracy and bring into contempt the office he once occupied.

“We’re fully aware that this whole act has always been about Mahama himself while pretending to be about others”.