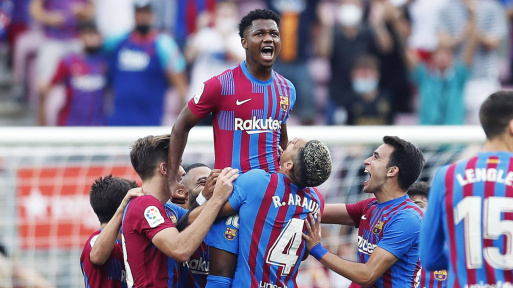 Barcelona fans are wondering what has gone wrong with their season.

After nine La Liga matches, they are in ninth place – five behind their arch-rivals Real Madrid and six points behind the table-topping Real Sociedad [who have, however, played a match more].

On Sunday Barça lost the El Clásico 2-1 at home, having earlier also been beaten 2-0 by the reigning champions Atlético.

The Catalan giants’ record in the Champions League makes even more dour reading as they are in serious danger of failing to escape the group for the first time since 2000.

They missed out on the Champions League in 2003/4 after finishing a disappointing sixth in La Liga. Since then, they have been on a run of 17 consecutive appearances in the knock-out stages of the competition.

It is not surprising that Barça fans are desperate to find something to give them hope to salvage their season, especially as the player who previously had been able to turn every game or season into something special – Lionel Messi – has left.

The Culés are now hoping that an African-born teenager is the player who can turn things around.

Born 18-years ago in the Guinea Bissau capital of Bissau, Ansu Fati grew up in Seville after coming to Europe with his parents. He started his footballing career in the youth teams of Herrera and Sevilla, before joining the famous Barcelona La Masia academy as a 10-year-old.

In July 2019, when he was just 16, he signed his first professional contract and a month later – without having ever played for the reserve side – he became the second youngest-ever Barcelona player when he came on as a late substitute in a 5-2 win over Real Betis.

Just six days later he became the clubs’ youngest goalscorer when he found the net in a 2-2 draw with Osasuna. And since then, he has gone on to break a host of other records.

Like so many other African footballer before him, Fati has chosen to represent his adoptive country and in August 2020 he received his first call up for La Roja, debuting on 3 September in a 1-1 draw against Germany. Three days later he became Spain’s youngest scorer in a victory against Ukraine.

But his career has also had it downsides as he suffered a serious knee injury in a La Liga match against Real Betis in November 2020, prompting a ten-month lay-off.

Fati is being billed as the new Messi and has this season been given the No 10 jersey which the diminutive Argentine international had made his own for so many years.

Despite wearing the same jersey number as Messi, he is not feeling any pressure. “No one is going to equal what Leo has done. I’m going to follow my own journey. I still haven’t done anything. I hope I can have a career like [he has] had.”

He has received some backing from club president Joan Laporta. “We didn’t put any pressure on Ansu, but the No. 10 suits him very well because of his style of play.”

Fati returned from his injury a few weeks ago – and albeit being introduced slowly – has given Barcelona fans hope for better things to come.

The teenager and his teammates will have two opportunities to show whether his presence can make a difference as La Liga has two matchdays coming up.

Barcelona are away to Rayo Vallecano on Wednesday and face Alaves at home on Saturday.

To catch those and other La Liga games, African football fans can watch La Liga live and in HD on the StarTimes channels.