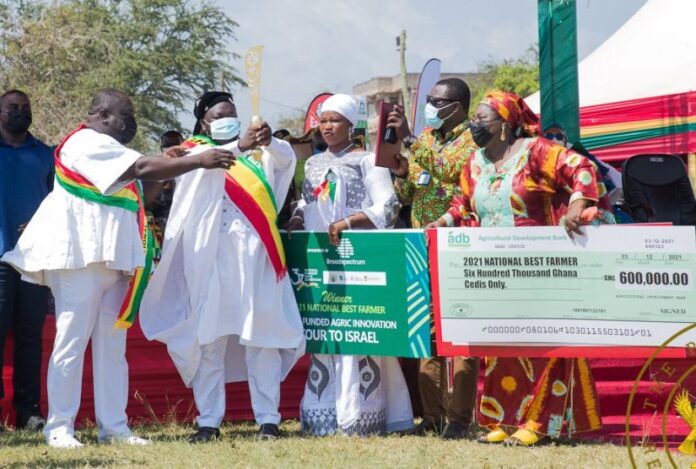 The 2021 National Best Farmer, Alhaji Mashud Mohammed, has said agriculture is a profitable venture that has bright prospects for those who will venture into it.

He demystified the erroneous perception that it is a form of punishment and a preserve for the uneducated and poor.

He, therefore, urged the youth to engage in agriculture for a brighter future, no matter their level of education.

“As the African Development Bank President once said: “If you want to be a millionaire in the next five years then come into agriculture and you’ll not regret it,” Alhaji Mashud Mohammed told the Ghana News Agency (GNA) in an interview on Friday.

Sharing his excitement with the GNA on the sidelines of the 37th National Farmers Day in Cape Coast, he said he was once a teacher but quit teaching and ventured into agriculture.

“I started farming about 15 years ago with four hectares of rice. Right now, I’m cultivating only rice about 500 hectares, and over 2,700 hectares of soya beans and maize. I have not regretted,” he said.

“So my motivation for doing all this is just that I saw that agriculture has a huge potential, especially when it comes to employment and feeding people”.

“Basically, that’s what I’ve been so much interest in doing over the past 15 years as a peasant farmer just to feed my family, but going forward, whenever I harvest, I give some to people so I had the belief that if I scale up, so many people could benefit from me and so I invested in it”.

“I want to urge the public, especially women and the youth, to venture into agriculture because there is so mush prospects in it, and indeed, I believe Ghana will be somewhere in the next five years in terms of agriculture.”

The climax of the Farmers Day celebration took place at the Adisadel College Park in the ancient city of Cape Coast, on the theme: “Planting for Food and Jobs; Consolidating Food Systems in Ghana.”

President Nana Addo Dankwa Akufo-Addo was the Guest of Honour and Odeefuo Amoakwa Buadu VIII, the Paramount Chief of Breman Asikuma Traditional Area and President of the Central Regional House of Chiefs, the Chairman.

It was jointly hosted by the ministries of Food and Agriculture and Fisheries and Aquaculture Development, as well as the Ghana Cocoa Board to recognise the enormous contributions of Ghana’s gallant farmers and fishers to socio-economic development.

165 farmers and fishers received awards for their meritorious contributions to the national economy and ensuring food security.

The Overall Best Farmer received GHc600,000 financial support from the Agricultural Development Bank to enhance his business, and 500, 000 worth of insurance cover by GLICO Insurance.

For the first time in the history of the awards, the Overall Best Fisherman would receive a two-bedroom house.

The event was attended by farmers, fisherfolks, traditional rulers, policy-makers, researchers, ministers of state, members of Parliament, development partners, the diplomatic community, and the public.

The agriculture sector contributes about 54 per cent of Ghana’s Gross Domestic Product (GDP) and employs about 60 percent of the population through the value chain.

It accounts for 40 per cent of export earnings while providing over 90 per cent of the food needs of the country.

Ghana’s agriculture is predominantly smallholder, traditional and rain-fed and the tree crops are significantly cocoa, oil palm and rubber while the food crops are mainly inter-cropped mixture of maize, cassava, plantain, cocoyam and yam.

Activities for the National Farmers’ Day started from Sunday, November 28, 2021, with a week-long agricultural exhibition and trade fair and the Farmer Market initiative, where farmers presented their produce directly to consumers at the Adisadel College Park, the venue for the celebration.

ALSO READ  Farmer's Day 2021: Dr. Kwabena Duffuor salutes all Farmers
AMA GHANA is not responsible for the reportage or opinions of contributors published on the website.