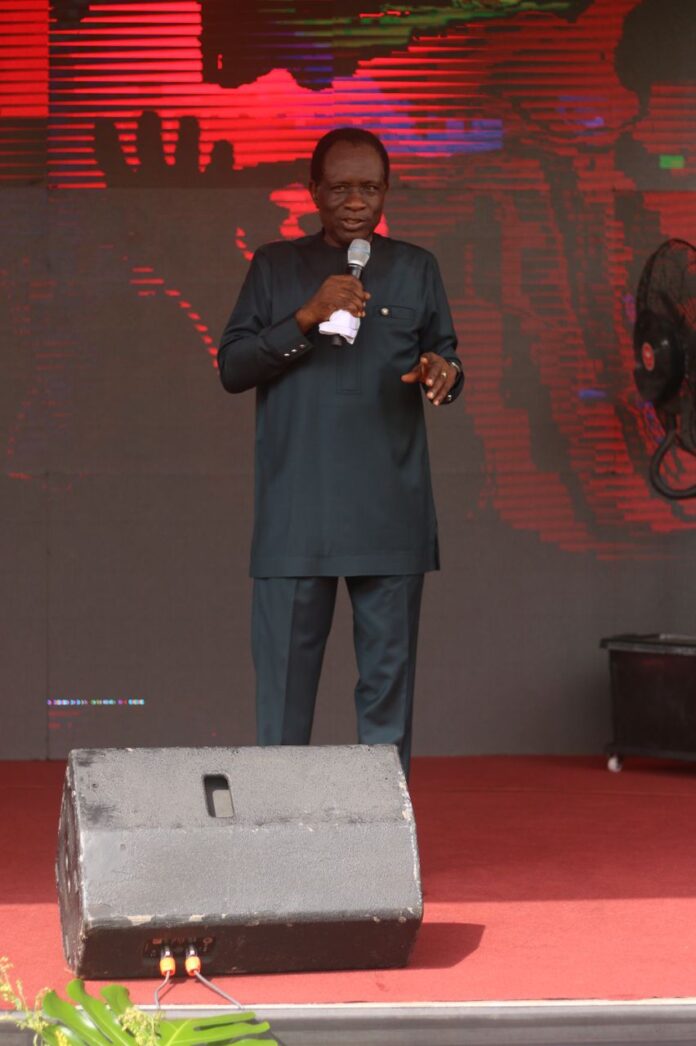 To climax the week-long Annual Thanksgiving Service 2021 of Jospong Group of Companies (JGC) and Zoomlion, the Presiding Bishop of Action Chapel International (ACI), Bishop James K. Saah, has stated that thanksgiving has the capacity to change any situation.

He said this could be likened to yeast on bread dough which increases the dough, adding that “thanksgiving also increases the blessing of the thanks giver.”

Bishop Saah who made the observation on Friday, December 10, 2021, admonished Ghanaians to be careful not to hold back thanksgiving due to God.

He explained that thanksgiving is a formal public expression of thanks to God.

Quoting from Genesis 8:22 to buttress his point, he said “thanksgiving operates by the law of sowing and reaping.”

“If you sow thanksgiving, God gives you something back, adding that “thanksgiving is in words and deeds

“There is no increase when thanksgiving is brushed aside,” he advised.

According to the man of God, people who walk in thanksgiving have increased immunity against diseases, saying that “thanksgiving can bring the dead to life.”

The Minister of Sanitation and Water Resources (MSWR), Mrs. Cecilia Abena Dapaah, who represented the Vice President, H.E. Dr. Mahamudu Bawumia, said Jospong Group of Companies was being led by an “indefatigable humble and God-fearing person,” a reason the group has instituted an annual thanksgiving service.

“Dr. Siaw Agyepong and his executives have found the key and the key is praise and worship,” she added.

“So the secret and the success of Jospong is that they worship God,” she noted.

“The annual thanksgiving is of great importance and I see it as a spiritual renewal to the group”, Mrs. Dapaah said.

She said the company wants to celebrate their gratefulness to God openly so this corporate thanksgiving should be preserved forever.

Jospong Group of Companies/Zoomlion which has become a household name started from a humble beginning, she indicated.

Mrs. Dapaah noted that that the government in its capacity has provided an enabling environment to make the private sector including Jospong to thrive.

“The company as of now recycles waste and as well turns waste into compost,” she said.

She went on to add that Zoomlion would soon have the capacity to turn waste into green energy, and thus appealed for support for Dr. Siaw Agyepong and his JGC.

Early on in a welcome address, the Executive Chairman of JGC, Dr. Joseph Siaw Agyepong, indicated that the thanksgiving service has been held annually to acknowledge the faithfulness of God in the group’s operations, and also appreciate God for sustaining them.

“As a company, it is our custom to gather like this at the end of every year to celebrate the goodness of the Lord over our businesses, employees, families, the President and his executives and appointees in government, chiefs, partners and other stakeholders,” he said.

According to him, the Akufo-Addo administration has given real meaning to the truism that the private sector is the engine of growth.

He stated that the enabling environment created empowers the private sector to do more, advising that “we in the sector should not waste it nor take it for granted.”

He applauded President Akufo-Addo and his government, for his “immense contribution” to the environmental sanitation space in the country.

“The government’s achievement in this sector is unprecedented and historic and it is worthy of note that since independence, over 60 years ago, it is during this administration that Ghana has experienced massive environmental infrastructural improvement.”

…Thirty-six (36) plants were commissioned within a year! These are 16 IRECoPs, 14 Medical waste treatment plants, 4 wastewater treatment facilities in Tema, Takoradi, Tamale and Kumasi, and decommissioning and reengineering of the two major landfill sites in Kpone in Accra and Oti in the Ashanti region with technical support from our American Partners using very modern technology

He said the above projects have significantly helped to address the sanitation infrastructural deficit in the country and bridged the gap between waste collection and disposal with its accompanying consequences.

Dr. Siaw Agyepong also praised his workforce for their hard work towards the growth of JGC and Zoomlion.