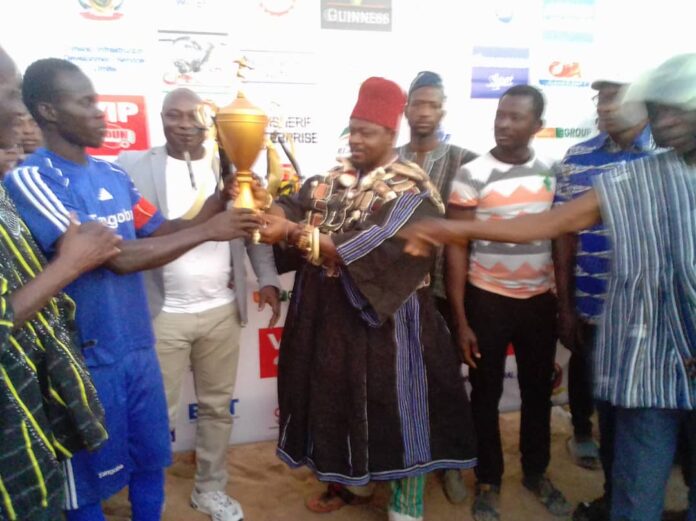 The finals of the football competition successfully came off on Sunday 23rd January 2022 organized by the Center For The Organization of Sports (COS Park) in the Navrongo Municipality of the Upper East Region.

In all 16 teams from various communities within the Navrongo Municipality participated.

The 1st, 2nd, 3rd placed teams each bagged home a set of jerseys, medals, cash, and a trophy.

The best player and goal king also went home with a pair of football boots with some cash while the best goalkeeper took home a pair of goalkeeper’s gloves and cash as well.

Addressing the event, the Overlord of the Navrongo Traditional Area, His Royal Highness Pe Dennis Aneakwoa Balinia Adda (Pe Asagpaare II) shared his vision of harnessing the potential of the youth of Navrongo through skills training and job openings to curb the rate of unemployment within the Municipality.

“I would like to appeal to the government, NGOs, including all well-meaning Ghanaians to support my people in diverse ways to make this vision a reality. I would also like to call for the formation of a formidable football team for the Navrongo people,” the chief said.

He further assured patrons of the inclusion of lesser-known sports into community games in the subsequent editions that will be organized.

“I would also like to plead with the Government and relevant stakeholders to prioritize the development of sports in the Kassena Nankana area by ensuring the completion of the stadium. This is because we want the next inter-community soccer tournament to be held in that facility.”

On his part, the Kassena Nankana Municipal Chief Executive Hon. Joseph Adongo, who was the Guest of Honour for the event was happy about the entire organization of this maiden football competition.

“I am very happy to this event come to a very successful end and as a duty bearer, I would like to assure you that I will knock on doors of the powers that be to ensure the early completion of the aforementioned sports stadium since the benefits of a completed stadium are indeed enormous,” the MCE assured.

He urged all participants to use the networks and friendships they have made to benefit humanity further foster peace and advance the progress and development of the area.

“Let’s show that we are all peace-loving people who want to see our region move forward and develop,” the MCE reiterated.