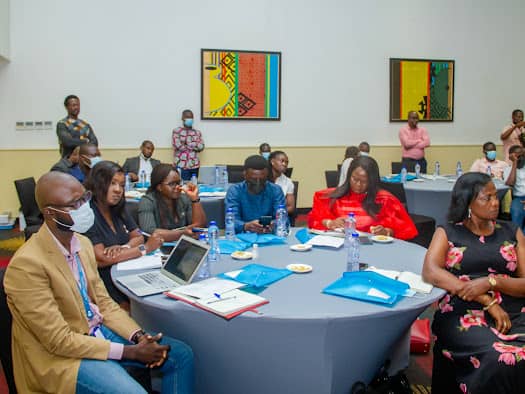 In a bid to address Child labour in cocoa-growing communities in Ghana, the government of Ghana through the Ministry of Employment and Labour Relations (MELR) with the support of the International Labour Organisation (ILO) is currently harmonizing the general Hazardous Framework (HAF) revised last year.

The review of the HAF which is on the theme: “REVIEW OF THE HAZARDOUS ACTIVITIES FRAMEWORK (HAF) FOR THE COCOA SECTOR IN COLLABORATION WITH THE ILO TRADE FOR DECENT WORK PROJECT”, I) to seek inputs from experts in the fields covered by the Cocoa HAF, ii) To delete all obsolete tasks and introduce new ones where necessary and iii) Discuss the modalities of adopting the HAF as legislation.

The overall aim is to ensure that all children in the cocoa-growing areas are safe, learning and succeeding, and are not working in conditions that jeopardise their health, welfare and development.

The event was organised by the Ministry of Employment and Labour Relations (MELR), International Labour Organisation (ILO) with sponsorship from the European Union (EU) under the Trade for Decent Work Project of ILO, aimed at eliminating child labour in the country.

Speaking at the event, Hon. Bright Wireko-Brobby, Deputy Minister, MELR said the review of this document is long overdue considering the impediment negative attachment to our Cocoa sector because of the over waited associated with child labour in the value chain of the production.

Adding that Children’s engagement in economical activities has wronged impact on our society which must be resolved immediately.

In an interview Akua Ofori Asumadu, National Project Coordinator, Trade For Decent Work, ILO, said despite the implementation of the first National Plan of Action (NPA1) on the Elimination of the Worst Forms of Child Labour (2009-2015 and 2017 to 2021), child labour has persisted and is endemic in many communities, especially deprived ones, hence, the review is necessary.

“During the past two decades, the ILO has been providing technical assistance to the government, workers and employers in Ghana to eliminate child labour, particularly its worst forms. Over 11 projects have been implemented including the trade for Decent Work Project funded by the EU and the Finnish Government, the West Africa Cocoa/ Commercial Agriculture Project(WACAP, 2001- 2003), Time Bond Project (TBP, 2004-2009), ECOWAS I and II projects (2010-2014), the ILO-IPEC Cocoa Communities Project (CCP, 2012-2014)”.

In the framework of the NPA1, developments included the introduction of the ghana child labour Monitoring System, the development of the Hazardous Activity Framework (HAF) and the Standard Operating Procedures(SOP) for addressing child labour issues.

To ensure the effective involvement of local communities in child labour monitoring activities, community registers have been designed and used in several cocoa-growing communities.

To enhance the practical enforcement of child labour laws, additional instructions such as: I) Child labour interrogation Form (CLIF), used to interrogate the suspected child Labour offender and ii)child Labour Report to the police used for reporting a child labour matter to the police have developed and are used of the social service sub-Committee (SSs-C) and Department of Social Welfare of all metropolitan, Municipal and District Assemblies (MMDAs).

Akua Ofori Asumadu reaffirmed that the ILO is committed to working with MELR to support the government of Ghana to continue to advocate at all levels to ensure no one is left behind, especially in this sector.

On his part Peter Antwi, deputy director at the MELR and vocal person on child labour said, five guards are to be considered in reviewing the HAF; namely: works that expose children to physical or psychological and sexual abuse, work underground or in dangerous heights, work with dangerous machinery, work in an unhealthy environment and work under particularly difficult conditions.

ALSO READ  Children need to be at the centre, they need to be protected and valued, together we need to #EndChildLabour
AMA GHANA is not responsible for the reportage or opinions of contributors published on the website.