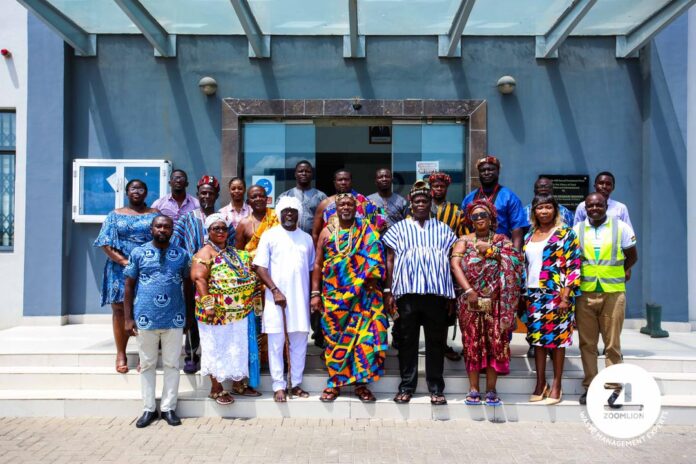 The Abola Traditional Council (ATC) has strongly affirmed its support for the efforts by the Jospong Group of Companies (JGC) to ensure that Accra, and for that matter the entire country, was always clean.

The council said a clean environment was good and one that prevents diseases and also keeps the citizenry healthy for them to contribute to national development.

The Paramount Chief of Abola Traditional Area, who is also the Atofotse of the Ga State, Nii Ahene Nunoo III, made the observation when he led a delegation of chiefs, queen mothers, and Ga warriors (Asafoatses) from the GTC to tour and familiarise themselves with operations of JGC’s state-of-the-art waste management facilities in the national capital, Accra.

He commended the Jospong Group for its continuous efforts to keep Accra always clean.

“We have seen the huge investment that Jospong Group of Companies has sunk into making Accra and Ghana clean, and definitely the Group needs our support,” he said.

He appealed to residents in the capital to always keep their environs clean, and healthy and refrain from practices such as indiscriminate dumping of refuse and dumping of solid waste into drains and gutters.

Furthermore, Nii Ahene Nunoo III, who is a member of the Ga Traditional Council, lamented the behaviour of some households who dump solid materials including pair of shoes, worn-out shirts, wallets, and car tyres among others into their sceptic tanks.

“It is displeasing that shoes, car tryes, and rags were found among faecal matter which is supposed to be liquid. It is a practice that must seize because it does not speak well of us as a people,” he advised.

This came to light when the Head of Engineering Sewerage Systems Ghana Limited (SSGL), a subsidiary of JGC which is managing the facility, Ing. Eric Amofa Sarkodie, bemoaned that such solid materials were often found in faecal matter after dislodgement, adding that they were seriously affecting their machines.

The Highest Chief Priest of the Ga State, Nuumo Akwa Mensah III, who was part of the delegation, charged citizens in Accra to join hands and support the JGC for Accra to become the cleanest city.

“We have all seen the difficulty with which the Jospong Group of Companies is working, particularly in the waste management space, to make our capital city clean. We need an all hands on deck approach to make them succeed,” he said.

He used the chance to appeal to the managers of the JGC to offer employment to the teeming youth within the location of their plants.

“I also want to add my voice to the call for residents in Accra in particular to stop the practice of indiscriminate dumping of refuse and other unhealthy practices. We should bear in mind that such practices are what bring about diseases which affect our health,” he noted.

The first point of call was the Sewerage Systems Ghana Limited where Ing.Eric Amofa Sarkodie, showed them around the operations of the plant.

From there, the delegation visited the Accra Integrated Recycling and Compost Plant (IRECoP) also within the same area.

Later, Nii Ahene Nunoo III and his team visited the Accra Compost and Recycling Plant at Adjen Kotoku in the Ga West Municipality and finally rounded up their tour at the Universal Plastic Products and Recycling Limited (UPPR), all subsidiaries of JGC.