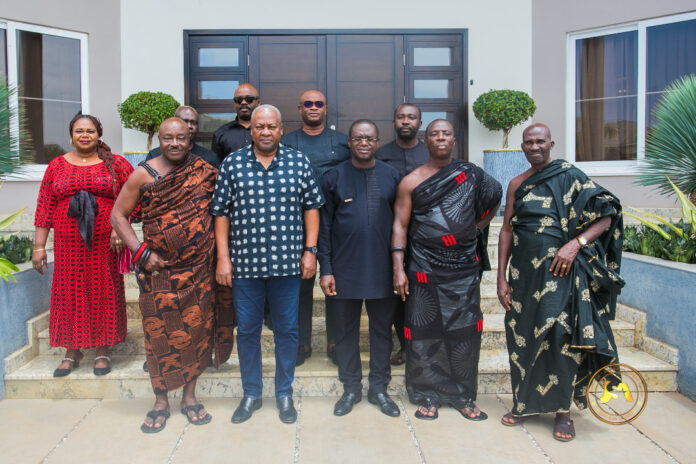 Former President John Dramani Mahama has accepted an official invitation from the bereaved family of the Executive Chairman of the Jospong Group of Companies (JGC), Dr. Joseph Siaw Agyepong, to attend the burial and funeral of the latter’s late father—Opanyin Samuel Kwame Agyepong.

Welcoming a delegation from the bereaved family led by Obomeng Aduana Abusuapanyin, Barima Osei Berko, at his residence in Accra on Wednesday, August 3, 2022, the former President condoled with the Agyepong family over their loss.

According to him, the year 2022 has been a very difficult one for Dr. Siaw Agyepong.

“First, it was his driver who was involved in a terrible accident, then his brother passed on, and now his father has also kicked the bucket. And so this year has not been easy for the family of my younger brother [referring to Dr. Siaw Agyepong].

However, he consoled the family of Dr. Siaw Agyepong that God knows what is best for them, adding that “He gives life and takes it away.”
“We are part of the Agyepong family and God willing on the funeral day we will come and support you to organise a befitting burial and funeral for our late father ,” the former President said.

According to him, “Not long ago, we respectfully came to inform your Excellency about the death of our father—Opanyin Samuel Agyepong. In spite of your busy schedule, you delegated somebody to represent you at the one-week ceremony of our late father. We are truly grateful to you, Your Excellency,” he expressed.

After the one-week observation, he indicated that the family met to discuss on the date for the burial and funeral of Opanyin Agyepong.
“And so we are here to formally inform you of the funeral arrangements, and also officially invite you to the funeral ceremony,” the leader of the delegation said.

The funeral date for Opanyin Agyepong, he said, has been set for Saturday, September 10, 2022, at the forecourt of the State House, Accra.

“In the afternoon on the same day, the family will accompany the mortal remains of Opanyin Agyepong to Kwahu Obo for interment,” stating that the funeral will then continue at the forecourt of the State House from 2:00 pm – 6:00 pm,” he noted.

He continued that on Sunday, September 11, 2022, a Service of Thanksgiving will be held in memory of Opanyin Agyepong at the Teshie Nungua Estate branch of the Church of Pentecost, adding that “this was where the late Opanyin Agyepong attended church while he was alive.”

“That same Sunday, after church we will continue with the funeral at his residence at Teshie Nungua Estates,” Abusuapanyin Osei Berko informed former President Mahama.

Amongst the delegation were Dr. Siaw Agyepong and some prominent members of his family.