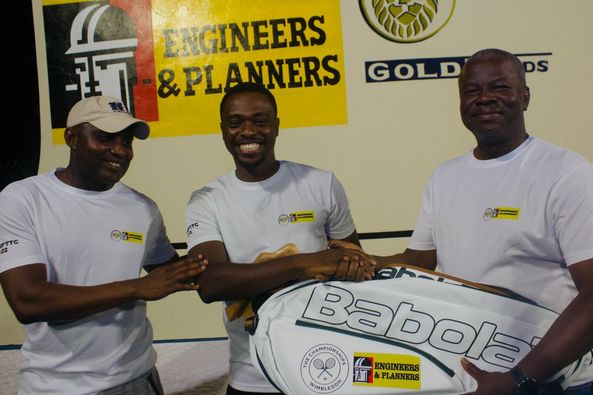 Showing no sign of nerves after falling behind in the second set, Jude raised his level to hit back to win the final set 6-3, 1-6, and (10-6)

“It has been a very difficult match for me, Jude said, it’s very hard playing against one of the best competitors in the tournament, someone who never gives up, I was patient, I played aggressively, I am happy with this win I am playing the best tennis this year now, on a very high level and have a lot of confidence in myself, in games”.

In the ladies final, No.2 seed Lisel Ampah of the University of Mines and Technology Basic School won her first singles title after stunning defending Champion Eunice Minta 6-3, 6-1.

“It’s feels good, I wanted this, I felt that I have to be aggressive, being 100% for every ball, that I don’ t allow her to come back to the match because Eunice is powerful and strong, she knows how to manage every moment, so I knew that I had to stay in there which I did pretty well today.”

In the Veteran’s category. Nicholas Ofosu, made light of intense competition for the veteran’s trophy after defeating Michael Bonsu 6-4, 6-4.

Lisel Later partnered her dad, William Ampah to win the mixed doubles title after overcoming Eunice Minta and Albert Naamu in the final.

In the Ladies doubles events, lady of the moment Lisel Ampah combined forces with Freda Opare Danso to oust Eunice Minta and her partner Janelle Minta-Afari.

Bismark Asubonteng took home the beginners title with a 6-3, 0-6, (10-7) triumph over Evans Otoo. William Ampah claimed his title of the night after outwitting Archibold Acquah 6-1, 6-2 to secure the consolation title.

Speaking at the final, Manager of Engineers and Planners at Gold Fields Tarkwa site Daniel Tweneboah said, we are here to deliver quality service to the mines , the industries business climate has been very dramatic this year. The time we received this call to sponsor this tournament was tight but Engineers and Planners (E&P) sees sports as critical as it links to the health and safety of the workforce that’s why we have to come on board to sponsor the tournament.

‘I am here on behalf of the management of E&P and the CEO who would have loved to be here to share his dream for mother Ghana and Tarkwa Goldfields mines. I am surprised with the turnout of events and huge praise to the head coach here, Richard Achagawe’.

Chairman of Tarkwa Gold Fields Tennis club Godfred Avane said, I want to appreciate Mr. Edward Taylor for his immense contribution to the club since day one. Secondly, I would like to acknowledge Engineers and Planners for coming on board to sponsor this year’s tournament.

ALSO READ  All set for Pillow Fighting Championship at Chorkor
AMA GHANA is not responsible for the reportage or opinions of contributors published on the website.