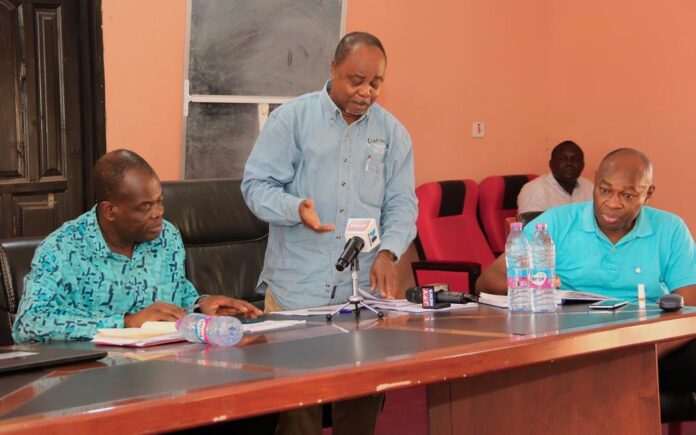 Farmers in the Savannah region have appealed to the Ministry of Food and Agriculture (MoFA) to assist them with farm machinery at subsidised prices.

According to them, such a move will help them to be able to purchase the needed farm inputs to reduce their operational cause and increase production.

The farmers, who were mainly into rice and cashew farming, made the appeal at a staff durbar organised by the MoFA at the Regional Coordinating Council (RCC) on Thursday, December 8, 2022.

The staff durbar, which involved agricultural extension officers and various farmers, formed part of the MoFA’s tour of the northern part of Ghana which kick-started on Monday, December 5, 2022, from the Upper West region.

However, the sector Minister, Dr. Owusu Afriyie Akoto, who had been leading the tour could not be part of the event because he had to attend to an urgent government business in Accra at the time.

According to the farmers, the government should consider setting up rice and cashew processing centres in the region.

These facilities, they explained, would serve as ready markets, and also add value to their produce.

Furthermore, they asked the government to intervene in the pricing of their produce, stressing that it was having an adverse impact on their businesses.

The Chief Executive Officer (CEO) of Ghana Irrigation Service (GIS), Ing. Wilson Acquah on behalf of the minister, commended farmers in the region for their hard work.

“Indeed there was surpluses in production for all the commodities which clearly showed the positive impact of the Planting for Food and Jobs (PFJ) programme.

On the issue of pricing of food items, he told the farmers that the government was working to set up a committee to generate standard prices for various farm yields.

“Especially with the grains, a committee christened the Grains Development Committee will be set up to check the pricing of grains including maize, cereals, millets etc.),” he divulged.

He was particularly happy that the PFJ policy was yielding positive results.

He tasked the extension officers and directors to check the illegal exportation of food to neighbouring countries, stating that this measure is aimed at ensuring that “Ghana becomes self-sufficient in terms of food.”

“If you want to export your produce, first write to the government for permit so we could get taxes on them, without permit you can’t export. Let’s all act as a check to illegal export,” Ing. Acquah Wilson urged.

2nd African Infrastructure Financing Summit: $160 Billion Worth of Projects on the Table