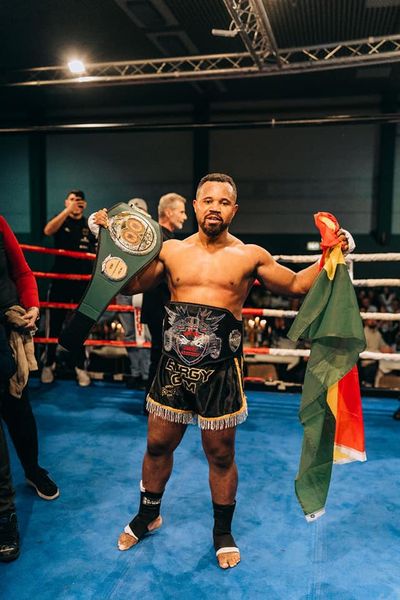 Ghanaian Kickboxer, Steavano Kojo Tuekpe (86kg) is the latest champion in his sport following a splendid defeat on Saruhan Dilmal (90.5).

They fought in the -91kg Weight Class, of ICBO K-1 Style and the Germany-based Ghanaian was just a marvel to watch with his power and skill.

Steavano Tuekpe who is also the official representative and active President of (WKU) World Kickboxing And Karate Union Ghana is a 2nd Dan Master.

He has had 32 international bouts and 18 bouts at home, winning 12 of them by knockout. He has suffered only two losses.

He has also engaged in MMA winning all his five fights.

Steavano Tuekpe has been a fighter since childhood and has been involved in combat sports like Karate do, Taekwondo, Boxing, and Kick Boxing. He also does Mixed Martial Arts (MMA) and others.

He thanked his management and promoter Baker Barakat for their support.

He believes Ghana has talent in combat sports, hence the government must invest in that area.

He believes if Kickboxing is added to the disciplines for the African Games, Accra 2023, Ghana can win more medals.

He also urged the media to promote other sports and not football only.

ALSO READ  ‘Two Guns’ Lerena Goes Glory Hunting Live on DStv
AMA GHANA is not responsible for the reportage or opinions of contributors published on the website.