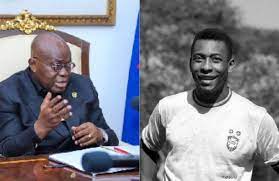 Ghana’s President, Akufo-Addo, has joined thousands across the globe to express condolences over the death of Brazil football icon, Pele.

In a Facebook post on Friday, the President praised Pele’s skills and contributions to the round leather game.

According to Akufo-Addo, Pele’s legacy will remain incomparable in the annals of football.

Touting the soccer legend’s clout, President Akufo-Addo said, “Those of us who had the privilege to witness his incomparable career will cherish forever the memories of skill, talent, determination, and sheer athleticism which we derived from his playing of the game he himself described as ‘the beautiful game’”.

“The Ghanaian people, who admired him deeply, join me in expressing our heartfelt condolences and sympathies to his family, the Brazilian people, the Brazilian government, and football and sports lovers the world over. There will never be another like him”, Akufo-Addo added.

Born Edson Arantes do Nascimento, he is credited with scoring a world record 1,281 goals in 1,363 appearances during a 21-year career, including 77 goals in 92 matches for his country.

However, he had been suffering with kidney and prostate problems in recent years.

Pele had surgery to remove a tumour from his colon in September 2021 at the Albert Einstein Hospital in Sao Paulo, after the tumour was dletected in routine tests.

He was readmitted to the hospital in late November 2022.

Prior to his demise, his daughter, Kely Nascimento, had been keeping fans updated on her father’s condition with regular social media updates from the hospital.

ALSO READ  From Zero to Hero

Following his demise, thousands of professional football stars and fans have expressed their commiserations amidst nostalgic recollections of his impact on the sport.

In a poll conducted by BBC Sport in 2020, Pele was voted the greatest player, ahead of Lionel Messi, Cristiano Ronaldo, Diego Maradona, and Johan Cruyff.

This for many remains evidence of his towering achievements in the game.