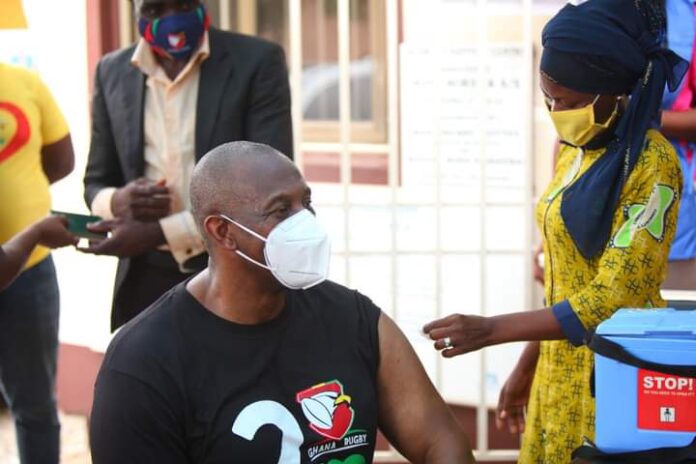 Over fifty (50) officials from the Ghana Rugby Football Union have taken the Coronavirus vaccine on Thursday in Accra.

The group took the vaccine publicly at Nima, a suburb in Accra.

They were led by renowned sports administrator Herbert Mensah who happens to be their President and Board Chairman.

Speaking to the media, Herbert Mensah called on Ghanaians to take the jab and avoid the unnecessary conspiracy theories about the vaccine.

Already, former President John Dramani Mahama has taken a dosage of the coronavirus vaccines which arrived in Ghana on last Wednesday.

He took the jabs on Tuesday at the Police Hospital in Accra.

Same exercise was done for his wife Lordina Mahama publicly at the same hospital on Tuesday.

Other personalities like the overlord of the Asante Kingdom Otumfuo Osei Tutu II, Apostle Eric Nyamekye, the chairman of the Church of Pentecost, actress Yvonne Nelson have all taken the jab.

ALSO READ  COVID-19 kills celebrated Ghanaian photographer Bob Pixel
AMA GHANA is not responsible for the reportage or opinions of contributors published on the website.