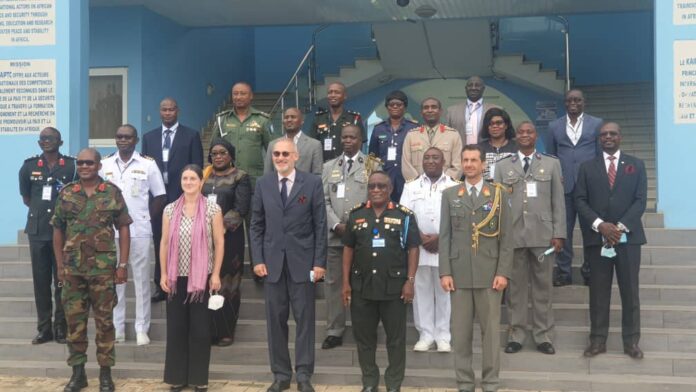 The ten (10) day residential course is aimed at training Political Advisors for UN Missions in Africa, AU, and ECOWAS operations and missions.

It is also meant to enable senior personnel from African countries and organizations to know the core tasks of Political Advisors (PolAds) working on conflict and crisis and improve the quality of information they provide.

Speaking at the opening ceremony at the KAIPTC, Major General Francis Ofori, Commandant for KAIPTC said, the role of the political advisor is very critical for providing the leadership with proper analyzes of developments, trends, and emerging issues in the country or region and making recommendations on possible policies, strategies and other measures to address issues of concern.

He said despite the potential important role of Political Advisors (PolAds) and significant engagement of African countries in African missions and operations, a formalized training of PolAds for Commanders of Operations and/or Heads of Missions has so far not been introduced in Africa.

“The complexity of the political and security environment in many African regions, where missions and operations are launched makes it challenging for heads of missions and operational commanders to thoroughly assess, monitor and analyze the impact and the political consequences of their actions. Also, due to the many different tasks, these heads of missions and commanders have to perform, they often cannot be aware of the full spectrum of developments from the strategic and international levels to domestic and regional situations”.

Adding that it is for these reasons that the KAIPTC and Austrian MoD are offering this course to build the capacity of potential and existing practitioners.

In all, 17 participants will be taken through relevant approaches in peace support operations such as Negotiation and Mediation, Public Diplomacy, Communication through the Media, The Possible Role of PolAds in ECOWAS and AU Operations and Missions, The Way Ahead in International Crisis and Conflict Management amongst others.

The envisaged target groups senior civilian (Director level), police personnel (Superintendent and above), military personnel (Lt Col and above) and NGOs who are either already in an advisory position or are likely to become PolAds in the coming years.

According to Major General Francis Ofori, the selection process will strive to achieve gender balance of participants as much as possible.

It expected that at the end of the course, participants would:

Undertake the tasks and responsibilities of a PolAd at the operational and strategic levels.

-Know and apply concepts and techniques of negotiation and mediation models for alternate dispute resolution.

-Communicate and interact effectively with the media.

-Harmonize and improve the interactions between various actors in the in/direct mission environment of a PolAd.

The problem-based learning approach will be used in the delivery of the ten-day residential course. Participants will play active roles in the learning process under the supervised guidance of a team of experienced facilitators. The course content will thus be delivered using a combination of tools such as; lectures, case studies, small group work exercises, and simulation among others. Hence the course will be conducted in English.

ALSO READ  KNUST SRC inaugurates committee to plan 60th anniversary
AMA GHANA is not responsible for the reportage or opinions of contributors published on the website.