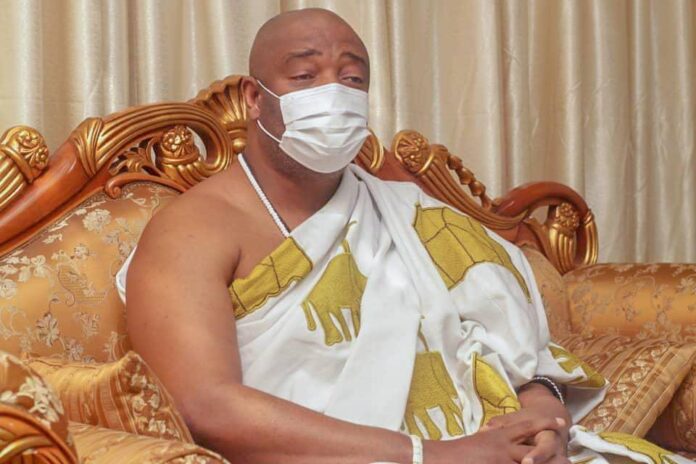 The waste management giant; Zoomlion Ghana Limited has paid homage to His Royal Highness, Ga Mantse, King Tackie Teiko Tsuru 11, and the Traditional Council in the fight against sanitation in the Greater Accra Region.

The delegation was led by its Managing Director, Mrs. Gloria Opoku-Anti at his residence in Accra.

According to Mrs. Anti, the visit was to congratulate the Ga Mantse, King Tackie Teiko Tsuru II on his enstoolment and further discuss areas for collaboration.

She reiterated the chieftaincy institution as a very important stakeholder in the fight against bad environmental practices within our communities and the country as a whole.

Mrs. Anti believes our Traditional Leaders have an influence on their citizens and calling on them to keep their environment clean will go a long way.

She seized the opportunity to explain to the King and his elders the company’s concept of the 1Million Bin Project which is being carried out nationwide as a very key plan towards the management of sanitation in the country.

This she explained to be important because when one has a bin at home, it reduces the incidence of indiscriminate dumping, reduces the spread of communicable diseases such as Malaria, Diarrhoea, and Cholera just to maintain a few.

She equally indicated that the project will promote Eco-Tourism and generate employment as well as revenue for the nation.

Mrs. Anti called upon the Ga State to hold high peace during the upcoming Homowo celebration and asked for the blessings of the council in upon the deliberations of the company.

The Management of Zoomlion presented items including Waste bins, Water and Assorted drinks, and an amount of GHC20,000 to the Ga Mantse.

The Ga Mantse, King Tackie Teiko Tsuru II on his part expressed appreciation to the Executive Chairman of the Jospong Group of Companies; Dr. Joseph Siaw Agyepong, and the management of Zoomlion Ghana Limited for the wonderful gesture.

He applauded the company for the various projects embarked upon nationwide.

He assured the company of his support in the promotion of the 1-Million Bin concept and appealed to all stakeholders to be part of such an initiative.