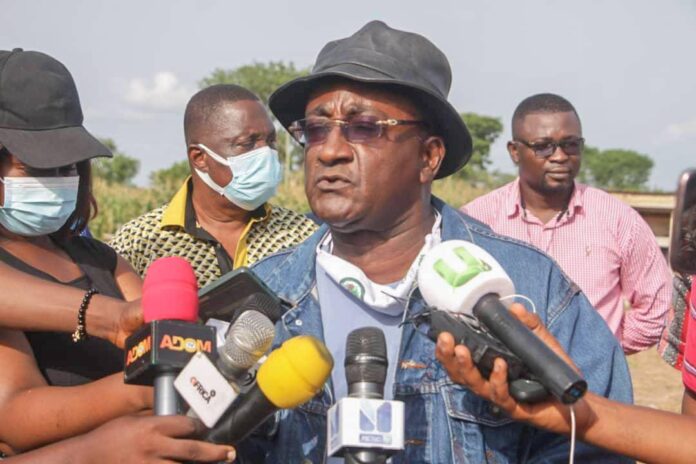 He made the observation on Wednesday, July 7, 2021, while addressing a gathering of farmers, extension officers, agricultural inputs dealers, regional directors at the Regional Coordinating Council, Bono East Region, as part of his tour of the region.

According to him, Bono East possess a high capacity for rice production, adding that “You have a high capacity with regards to your land to produce as much rice to feed the whole of the country.”

To this end, Dr. Afriyie Akoto assured the rice farmers of government’s support to enable them increase productivity and achieve that set goal.

He urged the farmers and the assembly to prioritise government’s projects in the area while entreating them to ensure the country reaped the full benefits.

To ensure that government attends to the needs of the farmers directly without recourse to the assembly, the minister admonished the farmers to organise themselves into farmer groups to engender swift response to their needs.

With regards to the maintenance of government projects, he noted that government would prefer to employ the services of the private sector for continual sustainability.

He indicated government’s desire to sustain investment in agriculture to enable the sector succeed, adding that the support of the private sector would also be engaged.

This, according to him, would ensure sustainability thereby enabling the country to reap the full profits.

Farmers in Yerenpenso in the Bono East Region appealed for a livestock council to facilitate swift interactions between the ministry and the farmer association.

“.What we need now is a livestock council so that we can channel our challenges to the ministry for urgent attention,” the Leader of the livestock farmers, Mohammed Bin, disclosed.

Mr Bin further pointed out that the establishment of a livestock council would aid farmers to relay their challenges to the government for swift response.

Yam and maize farmers within the area also called for the need to fix their roads to aid their activities.

At Quest Farms, producers of maize seeds for the Ministry of Food and Agriculture (MoFA) at Dawadawa within Kintampo North District of the Bono East Region, the Farm Manager, Bendong Jonas, appealed for irrigation facilities to ensure a year round cultivation of crops.

He also noted that a reduction in the price of fertilisers would help increase agriculture produce in the region.

Currently, he said, the farm produces crops such as cashew, mango aside from maize for MoFA for onward distribution to farmers on the government’s flagship programme, Planting for Food and Jobs (PFFJ).

Earlier, the minister called on the chief of Tachiman.

The minister on Monday and Tuesday toured and interacted with farmers and agricultural extension officers in the Ahafo and Bono regions respectively.