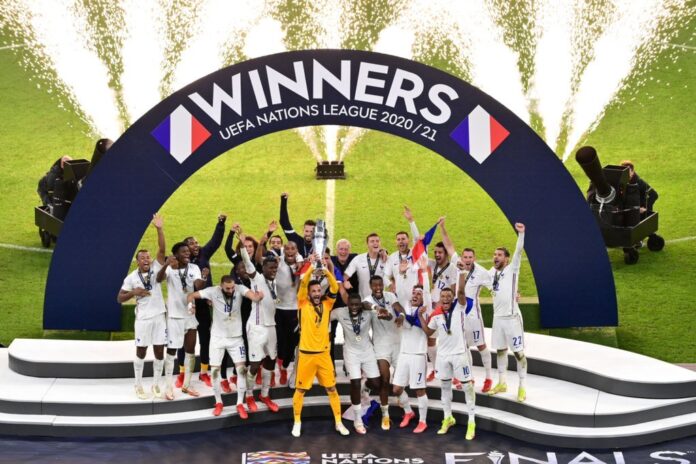 A controversial late goal from Kylian Mbappe sees France come from behind to produce a 2-1 win over Spain and win the Nations League trophy for the first time in their history.

Spain forward Mikel Oyarzabal broke the deadlock in the second half with a low driven strike before Karim Benzema immediately equalised with a stunning curler from the edge of the box into the top corner.

And with both sides pushing for their maiden Nations League title, Kylian Mbappe found the winner late on after calmly slotting the ball past Unai Simon. It went to VAR for a possible offside but the goal surprisingly stood.

In an uneventful first half, Spain had 64 per cent possession which contained three harmless shots on goal.

The best chance landed to Benzema in the sixth minute when he rounded goalkeeper Simon before looking to square the ball across goal, but Cesar Azpilicueta was in the right place to clear away.

The match changed from a scrappy affair to an end-to-end battle from the 63rd minute onwards. Theo Hernandez struck the woodwork from close range immediately before Spain broke at the other end and broke the deadlock thanks to Oyarzabal. He outmuscled France substitute Dayot Upamecano, who replaced the injured Raphael Varane in the first half, and drove his left-footed effort into the bottom corner beyond a static Hugo Lloris.

France equalised two minutes later thanks to an incredible strike from Benzema. The Real Madrid forward cut onto the right foot and curled his shot into the top corner despite Simon getting fingertips to it.

France grabbed a controversial winner late on as Mbappe ran onto a Hernandez through ball, produced a cheeky step-over in front of Simon before then slotting the ball into the bottom corner. It went to VAR for a possible Mbappe offside. It was a very tight call, but the goal was allowed to stand.

Oyarzabal almost found an equaliser two minutes from time, but his first-time volley was expertly parried away by Lloris’ strong right hand.

National team captain Lloris was the hero once again in the final seconds of injury-time, parrying away a low shot from impressive substitute Yeremi Pino and France held on to clinch the silverware.