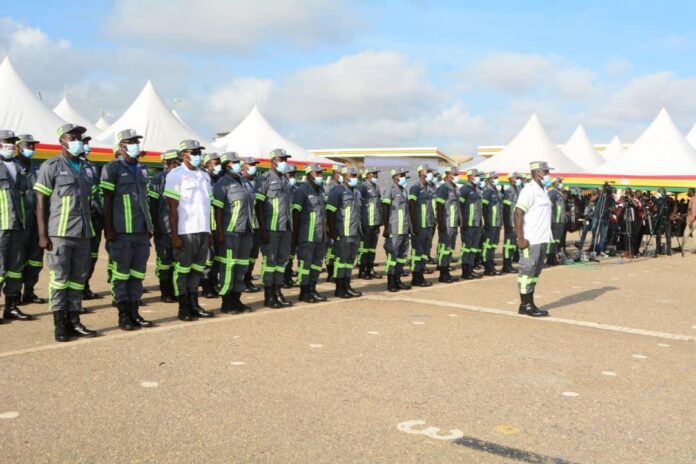 An initiative by the Greater Accra Regional Coordinating Council (GARCC), “Clean Your Frontage,” has been launched with the aim to ensure that all households and organisations clean and beautify their frontages to complement the government’s vision of making Accra the cleanest city in Africa.

The initiative will also see to the training of some 3,000 civilians under the City Responses Team,” and will be mandated to enforce the bye-law to govern the initiative.

Waste management company, Zoomlion Ghana Limited, has been contracted to create refuse collection points in all the twenty-nine (29) Metropolitan, Municipal, and District Assemblies (MMDAs) in the Greater Accra Region.

Launching the Clean Your Frontage Campaign at the Independence Square on Friday, October 22, 2021, President Nana Addo Dankwa Akufo-Addo was upbeat the initiative will change the mindset of Ghanaians towards the environment.

“This campaign is a good step in achieving the vision of making Accra the cleanest city in Africa,” he said.

However, he noted that over the years, the challenges with sanitation had had to do with logistics, enforcement of bye-laws, and attitudes of the citizenry.

The President commended stakeholders in the sanitation sector, especially the collaborating ministries, various political parties as well as the Greater Accra Parliamentary Select Committee, and the contribution of Zoomlion.

He reiterated: “I will do my possible best to make Accra the cleanest city in Africa.”

While describing the “Clean Your Frontage” initiative as very laudable, the Executive Chairman of Jospong Group of Companies (JGC), Dr. Joseph Siaw Agyepong, pledged the support of all private sector waste management players to the success of the project.
He assured further that they will continue to offer their support to the Greater Accra regional minister in his efforts to make Accra the cleanest city.

He said this initiative will make Ghanaians more responsible in ensuring that their immediate surroundings were always clean.
This, he said, will also offer service providers more space to take care of domestic waste collection at public places and street cleaning.

According to Dr. Siaw Agyepong since the inception of Zoomlion, a subsidiary of JGC, in 2006, it has made tireless efforts to help improve the country’s sanitation.

However, he pointed out that after several years of his company’s operations in the sanitation space, negative attitudes of citizens towards the environment and the lack of enforcement of sanitation bye-laws were two key challenges inhibiting a sustainable clean, and healthy environment.

“It is therefore very heartwarming that upon assumption of office, the Greater Accra Regional Minister, Honourable Henry Quartey, launched the “Accra Must Work Campaign” and the “Clean Accra Project, by the immediate past Mayor of Accra and his colleagues to make Accra Clean.

Zoomlion, he said, was also making a relevant contribution to support the regional minister’s quest to make Accra one of the cleanest capitals in Africa, “as well as the nation Ghana as a whole.”

In this regard, he said, Zoomlion has been releasing logistics and equipment to support the Accra Must Work campaign to achieve maximum impact aside from the already deployed logistics for its regular operations.

In addition to providing personnel, Zoomlion is providing about 85 compactors and 1,000 tricycles to support the campaign, the executive chairman of JGC stated.

“It will interest you to know that the company has come out with a new tricycle model and system of operation that will unionise and assist the informal waste collection sector to contribute to the waste management processes in a more formal and organised manner to improve waste collection in slums and poorly planned areas,” he disclosed.

The Greater Accra Regional Minister, Henry Quartey, explained that the exercise will train 3,500 youth as task force under the City Response Team to help polish the Operation Clean Your Frontage agenda.

To ensure effectiveness of the campaign, he hinted that dustbins will be provided from Ayi Menssh down to Ridge roundabout and other major roads within Accra to ensure that these towns are clean.

He used the chance to call on all and sundry to get involved in the campaign by keeping their frontages and surroundings clean.

In a solidarity message from the Minister for Local Government, Decentralisation and Rural Development, Mr. Daniel Botwe, said it was imperative that the 29 MMDAs in the region stand up to the task of ensuring the cleanliness of their frontages to give the national capital a new facelift that will be befitting of its status.

He encouraged residents in the region to abide by the bye-laws and get involved in cleaning their immediate frontages to make the exercise a success.