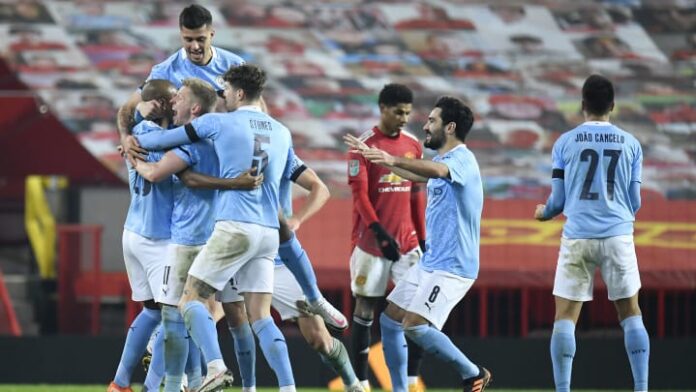 Ole Gunnar Solskjaer is under renewed pressure after Manchester United were outclassed 2-0 by Manchester City on Saturday while Burnley ended Chelsea’s winning streak in the Premier League.

Eric Bailly’s own goal and Bernardo Silva’s strike on the stroke of halftime proved the difference at Old Trafford but there was a huge gulf in quality between the teams in the early kick-off.

Struggling Burnley scored a late goal to earn a 1-1 draw against Premier League leaders Chelsea while Norwich lifted themselves off the bottom of the table by beating Brentford 2-1 for their first league win of the season.

Two weeks after their embarrassing 5-0 humiliation at the hands of Liverpool, United were again palpably second-best on home turf.

Only a string of stunning saves from goalkeeper David de Gea prevented Solskjaer’s men from another humbling in a match in which they could just muster a single shot on target.

United have won just one of their past six Premier League games, giving Solskjaer — and club bosses — plenty to ponder during the international break.

Last week’s 3-0 win at Tottenham gave Solskjaer hope his team had turned the corner and a late Cristiano Ronaldo goal earned them a valuable Champions League point against Atalanta in midweek.

The Norwegian admitted his men, who finished second behind City in the Premier League table last season, were well below par at Old Trafford.

But despite the string of poor results, he said he did not feel he was on borrowed time at the club, who last won silverware in 2017.

“I have good communication all the time with the club and that’s very up front and honest about the situation,” Solskjaer told Sky Sports.

City deservedly took the lead in just the seventh minute when Bailly sliced Joao Cancelo’s cross into his own net.

Spanish goalkeeper De Gea almost single-handedly kept the score at 1-0 but was at fault for City’s second when Silva stretched a leg to meet Cancelo’s cross and the United stopper allowed the ball to squirm into his own net.

“Against them, you want to attack quicker than you have to attack and if you don’t finish the attack you will be attacked much, much quicker and that is where they are so good,” City manager Pep Guardiola told the BBC.

“That is why we needed a game with a thousand million passes. We need a game like with the ball in the fridge, keep it there.”

Chelsea led through Kai Havertz’s first-half header and were 11 minutes away from moving five points clear at the top before Vydra stunned Stamford Bridge into silence.

“The second goal would have decided it. It’s always possible you miss one ball, one cross, and this can happen.”

The Blues are three points clear of second-placed City. Liverpool can move within one point of Chelsea if they beat West Ham on Sunday.

Brighton host Newcastle in the late kick-off on Saturday.