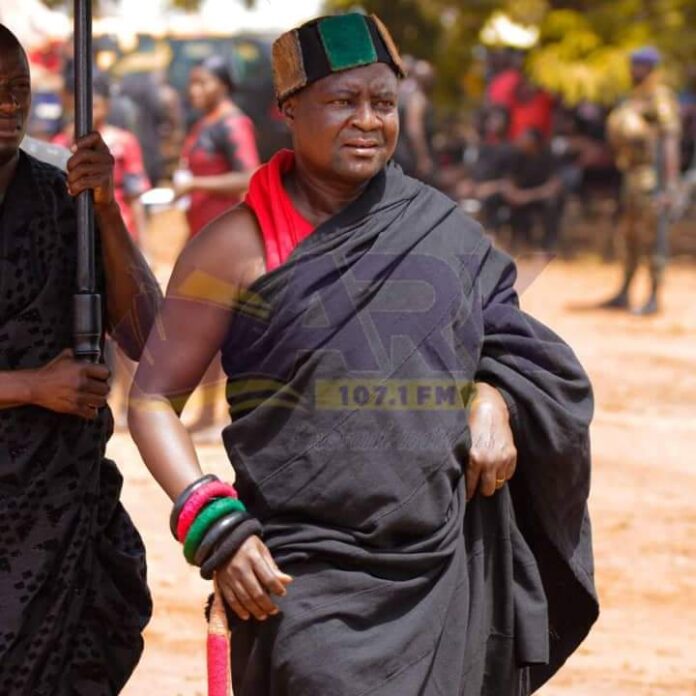 Opinion leaders, residents and football lovers, and Chiefs in Sunyani have rejected the government’s announcement to rehabilitate the Sunyani Coronation Park and give it a Face-lift, rather they requested a standardized sports stadium.

The Sunyani Coronation Park rehabilitation and facelift was announced on Wednesday in the 2022 budget presentation by Mr. Ken Ofori-Atta, the Finance Minister, and said, “In 2022, the government will continue with the construction of the Abiriw and the New Edubiase sports stadium, as well as commence the rehabilitation of the Sunyani coronation park stadium”.

Speaking in an interview with newsmen, the chiefs, football lovers, opinion leaders, and businessmen in the Municipality felt successive governments have failed to honour their promises made to the people of Sunyani.

Nana Kwame Addai Kuntuma IV, the Nifahene of the Sunyani Traditional Council insisted they would not allow any refurbishment again, saying the Traditional Council would ensure Sunyani gets a new sports stadium for all the sporting activities and not rehabilitation of the old Coronation Park.

He explained sporting activities tremendously boost economic activities and indirectly create numerous jobs for not only the people in Sunyani, but the region as a whole.

Nana Kuntuma IV emphasized the availability of job opportunities for livelihoods improvement, drastically reduces the crime rate in the area, because the youth would have something meaningful doing.

He added if there was a FIFA standardized sports stadium, it would attract investors and also promote tourism to improve the country’s revenue sources.

Mr. Ransford Antwi, the Chief Executive Officer for a Sunyani-based Suncity Radio felt the people of Sunyani had always been treated as “second class citizens” in terms of developmental projects and infrastructure.

Also a former CEO of the Brong Ahafo United FC, Mr. Antwi worried Sunyani had vast land for the construction of a new FIFA standardized sports stadium for all the sporting disciplines, therefore, kicked against the announcement to rehabilitate the old Coronation Park, saying “we want a standard stadium to unearth young talents, but not rehabilitation of old facility”.

Why is it that renaming is all they have for Sunyani from decades ago, don’t we deserve something better”? he quizzed.

Mr. Antwi bemoaned maintenance and rehabilitation works at the Sunyani Airport since 2019 was still not completed and now Coronation Park refurbishment, meanwhile, other Districts were getting stadia.

He lamented “after choosing to fall in love with the Elephant, what has the City of the Elephant got to show for our loyalty to the party, only refurbishment?.

Mr Michael Asare Yeboah, the Board Chairman for McKenzie Ghana Limited, Sunyani-based clothing, and sportswear company said he was “disappointed in those claiming they were political icons for Sunyani”.

He explained “Sunyani had undoubtedly produced numerous footballers for the Ghana Black Stars since time immemorial but is like successive governments were not recognizing that tremendous contribution to the progress of Ghana football.

Mr. Atta Akoto Senior, President of the Sunyani Youth Development Association stressed rehabilitation of the Sunyani Coronation Park rather than the new stadium was so disrespectful and ungrateful to the people of Sunyani.

He said, “leadership of the ruling New Patriotic Party in the city are loudmouth when it’s about defending their party but go mute when development is raised as an issue”.

Mr. Akoto further stated it was a mere mischief” to deny the people of Sunyani development”, adding, “those in charge to spearhead real development rather celebrate mediocrity in their back yard”.

“Ghana should not forget that the first world cup to ever touch the shores of Ghana was brought in through the captainship of one Alex Opoku from Sunyani in the year 1991”, he recalled.

Mr. Akoto in that regard stated, “if Sunyani in the best knowledge of the NPP does not deserve a new stadium which can also be useful for athletics and other sporting disciplines, they should forget about it”.

Major Kwame Baah, a former CEO of BA United in related development accentuates “we shall resist this, because, Sunyani’s contribution to the Ghana Black Stars was immeasurable”.

He worried schools and Colleges games, Division One league games, Cooperate games, Second Division league, fun clubs, and all social games were played at the same Sunyani Coronation Park, meanwhile, the Traditional Council had given about acres of land for the stadium project.

ALSO READ  'This is the best time to sanitise the NDC'
AMA GHANA is not responsible for the reportage or opinions of contributors published on the website.