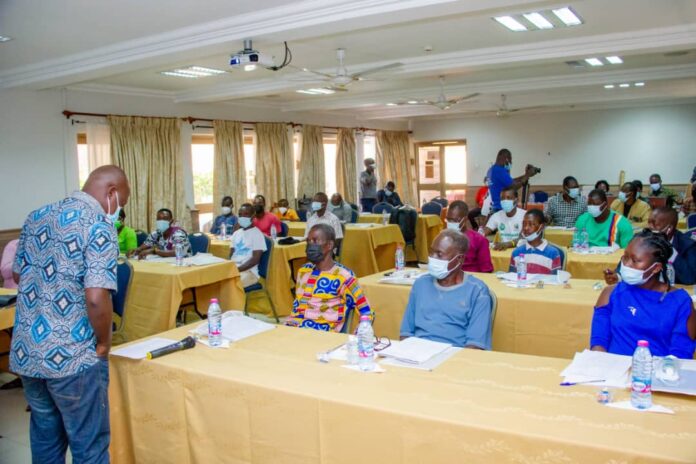 Due to the crucial role of the Community Child Protection Committees (CCPCs), there is the need to train the members of the CCPC on basic concepts on child labour, legislative instruments on the protection of children from all forms of child exploitation including child labour.

It is in this direction that the Ministry of Employment and Labour Relations (MELR), International Labour Organisation (ILO) in partnership with the European Union (EU) has organised a three-day training workshop for CCPCs in five cocoa-growing communities both in the Ashanti and Eastern Regions.

The training was to empower the CCPC members to carry out their roles effectively and efficiently to address all forms of child labour in their respective communities and also cover Standard Operating Procedures (SOPs) for monitoring, identification, assessing, and referral of children in child labour and at risk to available interventions.

The overall objective of the training is to equip the CCPC members with the basic concepts in child labour and the requisite skills to address child labour in the communities and also enhance understanding of CCPC members on Ghanaian international legislations in the protection of children against labour.

For the Eastern Region, two communities in the Juaben North District, namely Baasare Nkwanta and Suhyen-Mpaem has been selected for the 3-day training, scheduled 15th – 17th November 2021.

For the Ashanti Region, three communities in the Konongo Municipality, namely Apebourso-Agyareago, Amerfa–Kyekyewere and Duase Communities have been selected for the 3-day training session scheduled from 18th-20th November 2021.

The training also falls under the second component (Elimination of Child Labour) of the Trade for Decent Work Project of ILO which is aimed at eliminating child labour in the country.

ALSO READ  We can end child labour in Africa; Here's how

In an interview Akua Ofori Asumadu, National Project Coordinator, Trade For Decent Work, she indicated that it is very important for CCPC members to be more equipped with knowledge on issues concerning the elimination of child labour.

“We are actually looking at cocoa-growing regions and you know a journey of thousand miles begins with one step. Child Labour is prevalent in most sectors but we are just using these regions because we are just starting in cocoa. We are starting with cocoa because some studies show that child labour is prevalent in the cocoa sector. We know that Ashanti, Eastern, Ahafo, Western North, Western have a lot of cocoa farms, so we have done work in other regions but for now CCPCs we are dealing with Ashanti and Eastern,” she said.

She emphasised that due to the delay of Ghana submitting a report on child labour in the country, Ghana was invited by the ILO to explain the delay in submitting the report, hence under Trade For A Decent Work Project, Ghana has been up to date in reporting.

Highlighting the Hazardous Activity Framework which contains a list of things that are hazardous to children, she said the framework which was last updated in 2012 has been revised and is ready to be presented to the Ministry of Employment and Labour Relations.