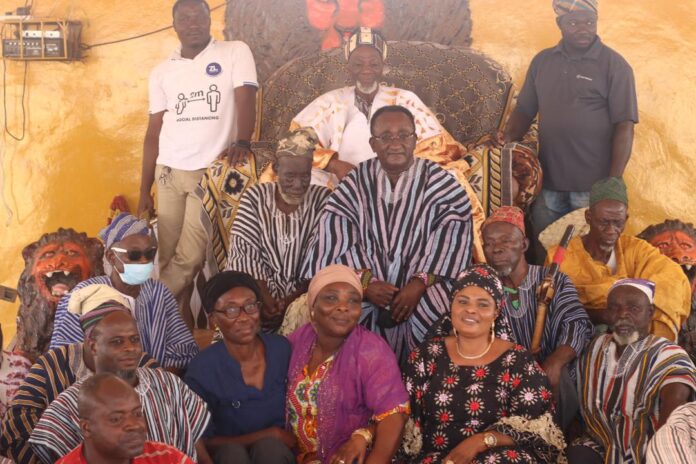 The Overlord of Dagbon, Ndan Ya-Na Abukari II, has praised the National Best Farmer for 2021, 44-year-old Alhaji Mohammed Mashud, who hails from Mion District in the Northern Region.

He said the award was for the people of Dagbon, thus urging the youth in Dagbon township and the country as a whole to emulate the achievement of the national best farmer.

“This award is for the people of Dagbon, and we call on the youth of Dagbon especially, and Ghana in general to emulate him.”

Ya-Na Abukari II made the commendation when the Minister of Food and Agriculture (MoFA), Dr. Akoto Owusu Afriyie, called on him at his Gbewa Palace in Dagbon in the Northern Region yesterday.

Dr. Akoto Owusu Afriyie is on a week-tour of the five regions in northern Ghana, and it forms part of phase three of his annual agricultural tour across the country.

Ya-Na Abukari II assured the agriculture minister of the Dagbon Traditional Council’s readiness to work with MoFA to ensure that the government’s vision for the agriculture sector is achieved.

He also applauded the government for its Fertiliser Improvement Policy, expressing his delights at the enormous benefit to farmers in Dagbon.

While congratulating the minister’s re-appointment, Ya-Na Abukari II lamented that northern Ghana was still lagging behind when it comes to development, noting that it was sad that a greater percentage of their arable lands were left with less attention in terms of usage.

“I know your re-appointment was purely on merit through your good works for mother Ghana, particularly your excellent performance at the ministry for the past four years,” the Overlord of Dagbon noted.

For his part, the Minister for Food and Agriculture, Dr Akoto Owusu Afriyie, said his visit was part of his annual tour of all the 16 regions to interact with stakeholders in the sector.
“I am on a working tour of the five regions to ascertain the progress of government’s continuous projects in the agriculture sector,” he said.

According to him, the five regions in northern Ghana (Northern Savannah, North East, Upper East & West) were very important when it comes to his portfolio as the agriculture minister.

He gave the assurance that he will continue to ensure that the needed infrastructures and projects to alleviate poverty and boost the country’s agriculture were in place.

“Let me also congratulate the National Best Farmer who happens to hail from Mion District in the Northern Region,” he expressed.
In the estimation of Dr. Akoto Owusu Afriyie, the amount of resources allocated to the agriculture sector by the Akufo-Addo administration cannot be matched since independence, adding that this has made Ghana become the “food basket of Africa.”

On the SAPID which is funded by African Development Bank, he stated that this project aims to absorb the youth into the agriculture sector in the five regions.

“We have picked Savannah Investment Programme (SIP) to promote livestock farming in the country, especially in the northern regions,” he said.

Touching on One District, One Dam (1D1D), the agriculture minister said this will help promote farming during the dry season, adding that building warehouses specifically eight to store a surplus of farm products was on course.

The minister’s one-week tour will take him to Northern, North East, Upper East, Upper West, and Savannah Regions, and it will afford him the opportunity to engage farmers to know their performances and challenges.