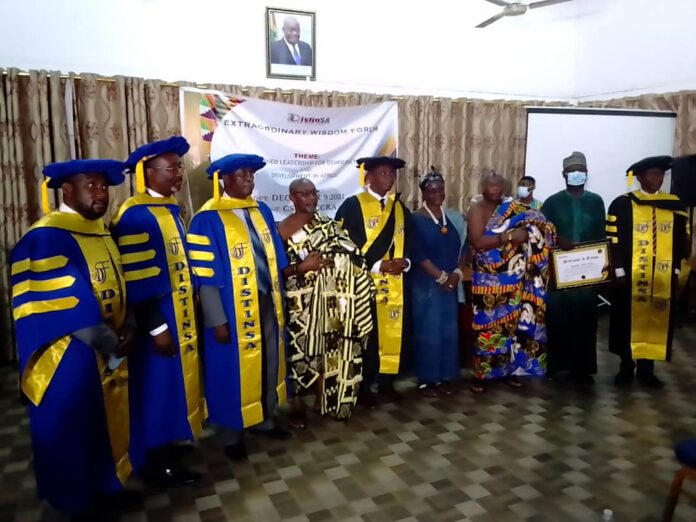 The forum held on the theme “Learned Leadership For Democracy and Development In Africa” was aimed at capacity-building of the private sector and government for socio-economic growth in Africa.

Prof. Dr. Lawyer Nana Oppong who is also the president of the Distinguished Scholars of Africa is the father of the theory of the Quantum lights and the General Rate of Presence (GRP) which posits that life, as configured on the planet earth, is founded on the light with the consciousness of man weaving in and out of presence at the speed of light.

He is also the Founder of the “Collaborative Theory for Human Evolution”.

Under his Economical research, he founded Nichematics and the journal of Nichematics a totally new discipline on economics with a focus on people’s resources and creativity as key to growth and sustainability of industries for development.

Prof. Nicholas N.N Nsoma-Nuamah and Prof. Martin Gyambrah have both played vital roles and held positions in the various educational sectors as well as government agencies.

Speaking to the media after the event, Prof. Dr. Lawyer Nana Oppong reiterated the need for government to reconsider and pay attention to the country’s democratic system.

According to him, the political system is dominated by confused actors with intellectual poverty.

“We have a problem of intellectual poverty dominating our politics, our religions, our schools, our businesses. A lot of “foolish” people masquerading as smart people vying for power and when they get into power, they create chaos, disunity, hate, and confusion and eventually nobody goes forward,” he said.

He urged the government to establish more suitable and sustainable jobs in order to curb the spread of the unemployment rate.

“I don’t agree with the government taking money from the all the time from the people, E-levy or not we need jobs and are the jobs coming for people to work and pay their taxes?, so government should take it easy or Ghanaian’s are going to suffer so we want the government to help us to develop. We have to cut down corruption but more love and Justice,” he added.

He continued, “And all these can be done in the presence of democracy because a good leader who doesn’t perform then the democracy becomes ineffective,” he stated.

Traditional rulers, professors among others were in attendance to grace the special occasion.