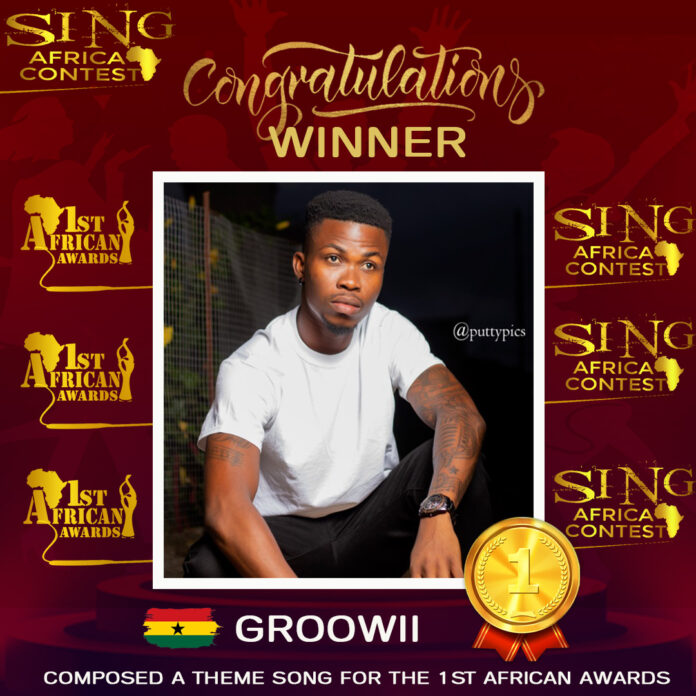 The Organizers of the 1st African Awards have finally announced winners for the Sing Africa contest.

This came up as an initiative to search for an official theme song that would be used for the 1st African Awards.

The winners of the Sing Africa contest 22 Final are:

This year’s competition attracted a record number of entrants

applying from across 54 countries. A total of 10 Entries were shortlisted to enter finals.

The road to winning this competition was demanding and competitive but Groowii came first as the winner for the grand prize of one Hundred and Sixty-Five Dollars and the Certificate.

Masoul MGM from South Africa placed the second position winning a certificate and a beat package from the producer Sydneyondabeat.

Papizzy DXP emerges third wining a certificate from the company.

These prizes and packages as promised by the company shall be presented to the winners on the grand awards night to be held in March.

The winner shall receive the complete beat from producers and then compose the official theme song for the 1st African Awards 2022.

Board Chairman Patrick Gasu @1st African Awards” I am so far impressed with the entries received and will like to congratulate each and everyone that took part in this contest. “. This initiative will continue and also give the platform to explore more composers we have in our industry.”

Congratulations to the winners.

ALSO READ  Paradigm Initiative (PIN) Premieres ‘FOCUS’ a Short Film on Digital Rights and Inclusion
AMA GHANA is not responsible for the reportage or opinions of contributors published on the website.