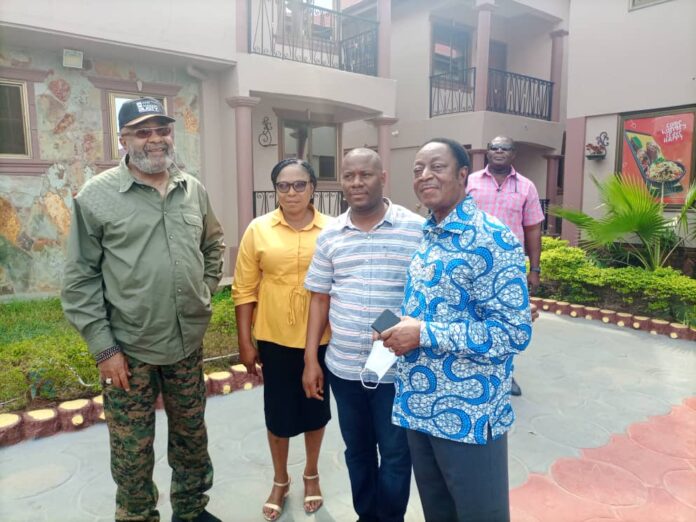 His Excellency Alhaji Said Sinare, National Vice Chairman of the National Democratic Congress, NDC, paid a courtesy call to the people of the Ashanti Region on Tuesday, March 1, 2021.

The vice chairman’s visit was primarily intended to thank the good people of Kumasi for their support and to evaluate the party’s preparedness ahead of the 2024 General election.

H.E Alhaji Said Sinare, upon reaching the entrance to the meeting ground, had to succumb to the pressures from the branch executives in the constituency as they offered to lead him.

“I thought this is the founder of the NDC, former President Rawlings oooo”, one of the executives stated.

H.E Alhaji Said Sinare and his entourage, which included some high-profile dignitaries from the National Democratic Congress, were given a good reception in the Effiduase Asokore constituency in the Ashanti Region on their first day of the outreach program.

The veteran politician seized the opportunity to inform the public and the branch executives in the constituency about some of the country’s difficulties, including high levels of insecurity, unemployment, a failing educational system, hardship, and reckless borrowing but warn his party people not to rely on the terrible nature of the government when going into the next general election.

In a post on his official Facebook page, the Zongo President Noted that the poor leadership of President Nana Addo’s Npp government must not make the NDC think they can win the election on a silver platter for that matter, the election needs dedication, commitment, loyalty, and hard work.

I made it clear to my outstanding branch executives that we cannot undermine the NPP just because they mishandled the country; instead, we must demonstrate dedication, commitment, loyalty, and hard work to win power in 2024 to rescue the good people of this country, part of his statement reads.

READ HIS FULL STATEMENT BELOW.

DAY ONE OF THE NDC OUTREACH PROGRAM IN THE ASHANTI REGION: I was delighted to spend a very good time with the lovely people of Effiduase Asokore and our brave branch executives in the Ashanti Region.

I explained to our people that Ghana’s situation under President Nana Addo and his NPP government, led by Dr. Bawumia, is in shambles, with fuel prices rising by the day, constant market inflation, rising unemployment, a currency in free fall, an alarming debt-to-GDP ratio, lost investor confidence, long-term strike actions by major public sector workers, a dysfunctional public education system, and grotesque mismanagement of the poor taxpayer’s money. Unfortunately, the government continues to ignore these concerns under the guise of “opposition propaganda.”

I made it clear to my outstanding branch executives that we cannot undermine the NPP simply because they mismanaged the country; rather, we must demonstrate dedication, commitment, loyalty, and hard work in order to win power in 2024 and rescue the good people of this country.

I encourage our dedicated branch executives to keep working tirelessly for the return of the next NDC government.