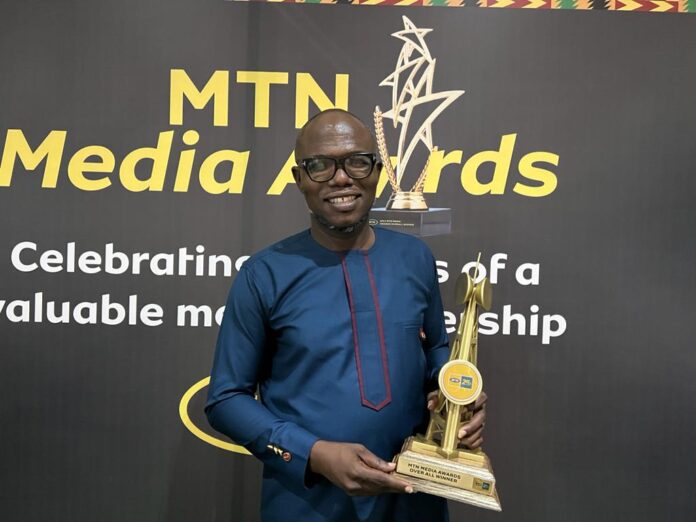 The Managing Editor of Techgh24, Samuel Dowuona emerged as the overall best journalist of the year 2021 at the maiden MTN Ghana Bright Media Awards held in Accra at the Alisa Hotel Ridge Arena on the night of Friday 11th March 2022.

The maiden event was organised as part of the telecom giant’s 25th Anniversary celebrations.

Mr. Dowuona first emerged the top out of three winners in the online category, with his article that chronicled how MTN digital investments has impacted every aspect of the lives of Ghanaians, from the individuals, through private businesses to even the government levels.

There were three other top winners for print, radio, and TV categories, with whom Mr. Dowuona went head to head for the top award and eventually emerged the overall winner.

These two awards bring Mr. Dowuona’s awards to four in less than a year.

Speaking with journalists after the awards, Mr. Dowuona said he is humbled for having emerged top winner among very fine colleague journalists, but was also glad that his years of consistency in shaping telecoms policy and telling industry stories with his pen has paid off.

He used the occasion to commend MTN for standing out as the only telecoms operator in Ghana which puts its money where its mouth is as long as media development in Ghana is concerned and expressed the hope that the telecoms market leader will continue to do more to promote excellent journalism in Ghana.

In the print category, Ama Barfi Achaah of Daily Graphic emerged as the top winner, while Michael Abataye of Ghanaian Times and Suleiman Mustapha of Daily Graphic came in as first and second runners-up respectively.

For the online category which produced the overall winner of the awards (Samuel Dowuona), Rev Dr. Felix Klutse of Business Day Ghana and Kofi Ahovi of Businessweek were the first runner-up and third runner-up prizes respectively.

For the radio category, Thomas Tetteh and Rosemond Adjetey won prizes in the first and second slots.

10 special awards were also given to some media institutions and deserving individuals.