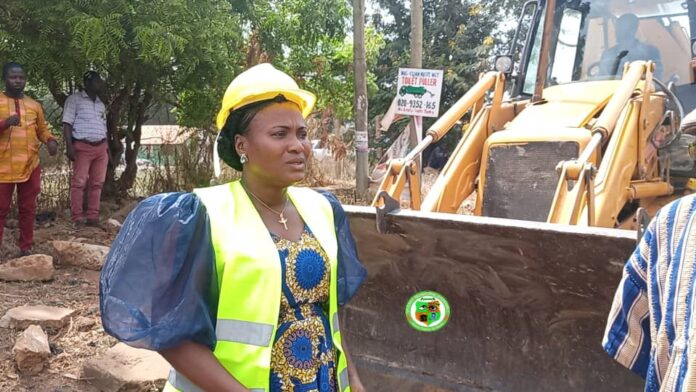 She said this at a ground-breaking ceremony to commence the construction of Abokobi Town roads on Wednesday, 30th March 2022, at Abokobi.

Phase one is a 1-kilometre construction of the Abokobi-Sesemi road (Paolo Mohenu road) a section of which the drains will be constructed within three months.

Phase two involves a 1.3-kilometre rehabilitation of the Adjei Okwejen road (Abokobi Town main road) through the Abokobi Station and the Saka Addo road (Abokobi Health Centre road) and back.

The project, estimated to cost 1.2 million Ghana Cedis  and financed through the Internally Generated Fund (IGF) of the Assembly, is being executed by Sikasem Limited.

Speaking to the media after the symbolic ground-breaking, Hon. Elizabeth Kaakie Mann, said the President was committed to fulfilling the “Year of Roads” promise and appealed to the residents to remain optimistic about the improvement of the roads in their communities.

“I want to assure all residents within the municipality that my outfit is poised to ensure that massive development hits every corner of the area in the next few years” she disclosed.

The Hon. MCE assured that funds had been made available for the execution of the project and would monitor to ensure quality is delivered within the stipulated time.

She also called on the community members within the area to give their necessary support and cooperation to the contractor to be able to complete the project successfully.

Hon. Kaakie Mann also charged the contractor to ensure that the project is completed on time to serve its purpose.

Chief of Abokobi, Samuel Nii Adjetey Mohenu, expressed delight at the move by the Assembly to give Abokobi Township roads a face-lift.

He pledged his support and commitment towards ensuring that the project is undertaken successfully to bring relief to the residents and users of the roads.

The Ag. Municipal Urban Roads Engineer (MURE), Ceaser Sackey, said his outfit will regularly monitor the execution of the project to ensure that the right job is done as specified in the contract documents.

On his part, the Contractor of the project, Maxwell Amponsah assured the stakeholders and the people in the area of his determination to work expeditiously within the time given and deliver value-for-money work.