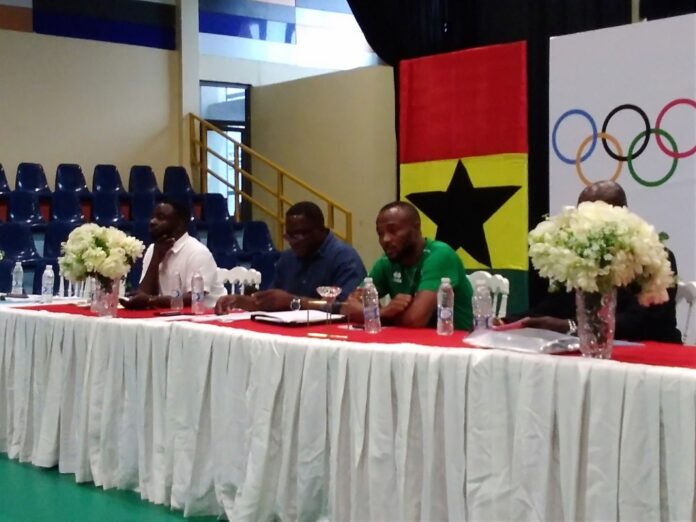 The 2022 Annual General Meeting of the Ghana Olympic Committee (GOC)/Commonwealth Games Ghana (CGA) came off at the Ga Mashie Hall of the Trust Sports Emporium on Saturday, December 17th,

Delegates of the Congress decided on whether to the election of the First Vice President position should be held after the President’s address in a motion tabled by Mr. Charles Osei Asibey, President of the Ghana Armwrestling Federation.

President of the Ghana Weightlifting Federation, Mr. Jerry Ahmed Shaib in a counter motion suggested that there are other key issues, like auditors report and discussion of budget that must be considered before the election.

Motion to vote for the vacant position after the President’s speech was accepted by the Congress with 36 votes as against 15.

After a vote by raising of hands, the Electoral Commission of Ghana came off with the secret balloting, and Mawuko Afadzinu, President of the Ghana Table Tennis Association beat Hon. Mohammed Adjei Sowah, Chairman of the Greater Accra Regional Swimming Association by 38 to 19 to be elected as the new First Vice President of the GOC/ CGA. He was sworn into office

52 African Countries were at the Tokyo 2020 Olympics and Ghana placed 10th alongside Botswana, Burkina Faso and Cote D’ivoire.

Amongst the African medal-winning countries, Ghana presented the least number of athletes and officials.

He recalled meeting with the President of the Republic of Ghana, Nana Akufo-Addo to introduce the new administration.

He suggested that a biannual sports festival be held to encourage sports in the country.

The GOC President mentioned the exceptional performance of Samuel Takyi who was selected to represent Africa at the closing ceremony of the Olympic Games and stood by the President of the International Olympic Committee (IOC).

He was proud of Ghana which placed 86th among 206 nations. He said 52 African Countries were at the Tokyo 2020 Olympics and Ghana placed 10th alongside Botswana, Burkina Faso and Cote D’Ivoire.

He stressed that amongst the African medal-winning countries, Ghana presented the least number of athletes and officials.

He thanked the Minister of Youth and Sports who was in Tokyo to motivate the athletes.

He thanked Ghana’s Ambassador to Japan and the Mayor of Inawashiro as well as the sponsors of the GOC / CGA.

At the 2022 Commonwealth Games in Birmingham, he hailed Team Ghana for winning five medals, three bronze medals from Athletics and Boxing and two Silver Medals from Boxing.

He commended the Marketing and Sponsorship Committee of the GOC for attracting sponsors like Twellium Industrial Company, Ashfoam Ghana and Cocoa From Ghana.

He thanked Mobility International for donating two motorbikes to the GOC.

He also talked about the Queen’s Baton in Ghana and the Olympic Africa project for juvenile sports excellence at Amasaman.

He said frantic efforts are being made towards preparations for some international Games including Accra 2023 and the Paris 2024 Olympic Games.

He mentioned that the GOC has secured international brand support and scholarships for Ghanaian athletes.

He thanked the Treasurer and his Deputy for their hard work.

Mr. Mohammed Sahnoon, Secretary General of the GOC commended the staff of the GOC and prayed that roles would be carried out in a regulatory manner.

Hon. Adjei Sowah thanked the delegates, as they are one big family, while Mawuko urged members of the Congress to bury differences and forge ahead. He thanked everyone who attended the Congress.