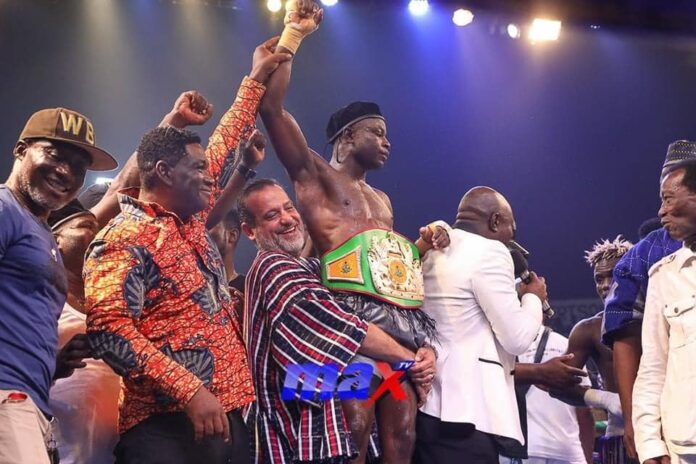 18-year-old Charles Yaw Tetteh from the Panix Gym, on Monday, became the new Ghana National Super Featherweight Champion when he beat John “The Magic Man” John Quaye, 22 of James Town on points after 10 hot rounds at the Bukom Boxing Arena to determine who is the best boxer of the 2022 De-Luxy Professional Boxing League Fight Night 20.

It was labeled as one of the big fights at the 4.000-plus capacity Trust Sports Emporium where every seat was occupied with some people standing.

Many connoisseurs of the game tipped John “The Magic Man” Quaye to win but he turned out to be on the receiving end.

Hard-punching Charles Yaw Tetteh was just marvelous on the night and won the hearts of many fans. He was on top of his game and won the rounds one by one. He did not fear his opponent and went in hot and powerful.

In other bouts, Alidu Suleman defeated Yahaya Yusif as he floored him three times. Godson Amuzu floored Rocky Otoo, while Mandela Atulik lost in round two to a Benjamin Saka Bulley.

Joseph Tagoe defeated Michael Bibi at the end of six rounds of boxing in spite of encountering problem with his footwear.

Sheihk Daniel was too big for Prince “the buzz” Larbie in their juvenile bout.

Charles Quartey Boxing Foundation were presented with keys of the new Renault salon car as winners of the Boxing League competition by Premium Motors.

Dada Yohane with his dance crew, Nero X and Adote Tetor thrilled the fans with entertainment.

The final of De-Luxy Professional Boxing League was sponsored by Renault, Imax Electronics, Techno, TCL Max Buy, Niche Cocoa, Guinness, and Soccerbet. The show is supported by Eddy’s Pizza, and TT Brothers and is telecasted live on Max TV.