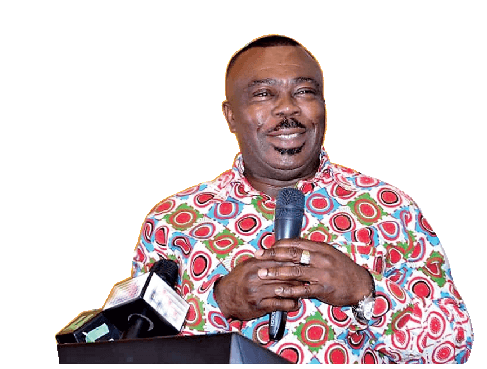 The Director-General of the state Interest and Governance Authority Stephen Asamoah Boateng has noted that many people get complacent when they record some improvement hence the need for strict supervision.

According to him getting complacent after recording some improvement in your work or life is a “danger sign” which he does not entertain.

Explaining why he appeared angry and spoke in a seemingly harsh manner to some Chief Executive Officers of State-owned Enterprises, Mr. Asamoah Boateng said he did that to discourage complacency in the CEOs.

“I know their caliber, I know how serious they want to work, I know what they’ve done and this report shows there’s been much improvement.

…But you see the danger sign in Ghana is that people get complacent when there’s some improvement and they slack, this is what I tried to prevent”

Even though the workshop was supposed to start at 9:00am, it had to be delayed till 10:00 due to lateness and absenting CEOs.

Mr. Asamoah Boateng was obviously unhappy and asked whoever was unwilling to work “to leave” as there are several others standing by to grab the opportunity.

According to him, even though the statement he made sounded a bit harsh, it quickly alerted some of the CEOs and they joined the meeting through online.

“I was not angry, I do respect my CEOs a lot and they know it, it’s just that sometimes they are…it’s just time management that’s all,” he said.

Speaking to Evans Mensah on PM Express on Joy News channel, the SIGA boss extolled the CEOs saying there has been massive improvement since 2018 and that has been a collective effort and hard work from them, his office staff and himself.
[18:40, 08/09/2021] MEWAAPIN: I’m bringing Energy, motivation and Excitement to spur our party to victory in 2024- Asabee

The Director General for State Interests and Governance Authority, Stephen Asamoah Boateng has said that his reason for aiming at chairmanship of the New Patriotic Party is to bring back the energy, love and excitement the party needs currently.

The energy, love and excitement he noted, would bridge the gap of disconnect between the party’s top executives, the government and the party’s grassroots base which will enhance their ambition of breaking the eight years line in governance.

Speaking on PM Express on Joy News Channel, he bemoaned the lack of connection between the NPP’s top hierarchy and the grassroots base pointing that there is the urgent need for energy in the party.

“I understand that when you get a good leadership whether a party or nation, you have the strength to advance your objectives and my party is a solid organization with people with all sort of backgrounds.

…But when you come into government, sometimes there is a disconnect and I have noticed the disconnection and it happened to us when we were in government before, and we lost. Same thing happened to the NDC, and they lost.”

So I thought to myself that why should I sit down for that disconnection to continue to linger for my party to lose in 2024.

Mr. Asamoah Boateng who is affectionately called Asabee pointed that Ghanaians are better off with the NPP in government than the NDC because the former are better managers of the economy, “so why must I sit and watch us lose power.”

He announced his intention to contest the chairmanship position a few months ago comes into the race with a long history of dedicated service, experience, and wealth of knowledge for which reason many have welcomed his intention.

Serving in various ministerial positions including Information and Local Government minister in the Kufuor Administration, and now Director-General of SIGA, gives him so impetuous to rub shoulders with the top hierarchy as well as communicate effectively with the grassroots base to enhance the desired energy he seeks.

The SIGA boss who initially attempted to refrain from speaking about his chairmanship ambitions could no longer resist the flattering temptation of the host of the show to comment on it.

He was grateful to have the opportunity to serve as SIGA boss but said his main priority is to serve as chairman of the party so that “we can hold the party strong enough and energized, motivated and excitement to spur our people on to victory come 2024.”

Preview of Serie A matchday 2