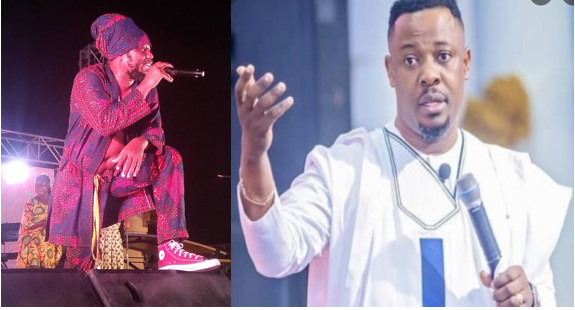 Friday, 10th September 2021 will go down in history as the day Kuchoko Legend, Blakk Rasta proved all his critics wrong when he mounted the stage to do an unprecedented VIP, corporate Reggae /Kuchoko concert that saw Ministers of God, Kings, lawyers, and chiefs attending in the originally 100-person restricted event held at the Zylofon media complex in East Legon, Accra.

Blakk Rasta overwhelmed the crowd with his untold energy and dexterity with the live band when he did an over two-hour performance that saw so many people donating thousands of dollars, scrambling over souvenirs at the end.

The artiste did 22 songs ranging from his 11 studio albums from a career spanning over 20 years.

Just as Blakk Rasta came on stage, the party was interrupted by sirens blowing outside the venue. He joked that the sirens signified a bullion van bringing money to the gathering.

Alas, it was Prophet Nigel Gaisie who was arriving at the event clad in a black suit, spraying money at the gate, led by police.

In the middle of Blakk Rasta’s performance, the controversial prophet handed a fat, white envelope to Blakk Rasta and excused himself to attend his weekly all-night worship.

Blakk Rasta threw a fresh challenge at Shatta Wale asking him to get off from the back of the computer and come hit the live band stage with him. This was said in response to Shatta Wale releasing a diss song against the Kuchoko Legend a week ago called, NIGHT VISITS. The two artistes have had a father and son relationship before in the past but have fallen into bad blood a few years back with each blaming the other for ungratefulness.

The colourful corporate TİMBUKTU BY ROAD album event had so much food, drink, and pizza for all patrons driven by Kasapreko, Prisklem, Vegan Pot, KikiBees and Cheezy Pizza. It will go down as the first-ever corporate Reggae/Kuchoko event ever held in Ghana as the over-satisfied patrons belched away their excitement and support.

One patron from Jamaica, Barry Gad could not hide his excitement when he said, “Blakk Rasta is overwhelming. He doesn’t make us miss Jamaica at all. I never knew he had such tremendous energy. Anywhere he performs, I will be there. I am his biggest fan from today.”